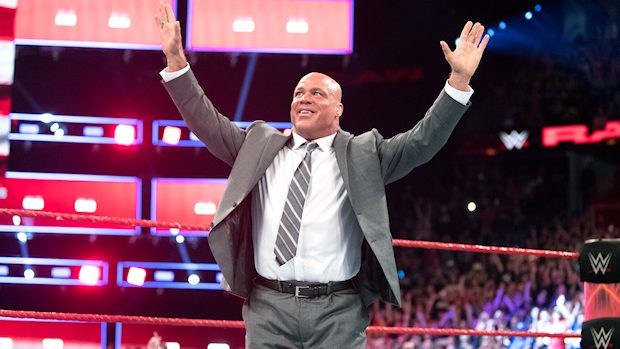 — Kurt Angle could be returning to WWE television sooner rather than later. According to a report by PWInsider.com, the WWE Hall of Famer is slated to be at Raw this Monday in Sacramento, California.

Back in August, “The Olympic Hero” was placed on vacation from his role as Raw General Manager by Stephanie McMahon. He was last seen on Raw on November 5, when he lost what looked like a “passing of the torch” match with Drew McIntyre, just three days after wrestling Dolph Ziggler in the WWE World Cup Tournament at WWE Crown Jewel.

Baron Corbin has inherited Angle’s position as the Raw authority figure in his absence, recently anointing himself as the red brand’s “General Manager-Elect.” What’s interesting about the timing of Angle’s return is that Corbin will put his power on the line against Braun Strowman tomorrow night at WWE TLC in a Tables, Ladders and Chairs Match.

If wins, he will battle Universal Champion Brock Lesnar at Royal Rumble 2019. If Corbin wins, he becomes the Permanent Raw General Manager. If Corbin doesn’t win, he will be stripped of all authority.

— At WWE TLC 2014, John Cena and Seth Rollins battled it out in a Tables Match that featured rampant outside interference and a controversial restart. Courtesy of WWE, you can watch this match in its entirety.