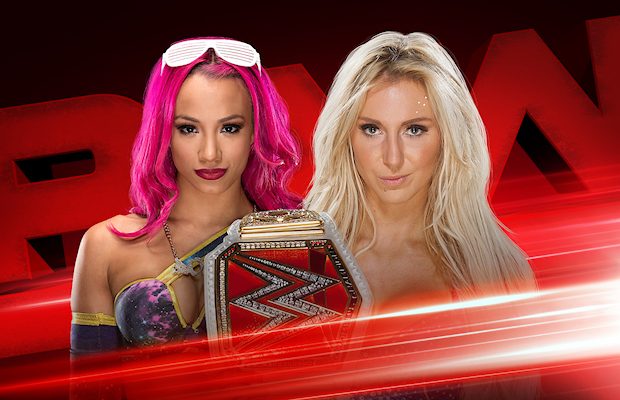 – We go to the ring and out comes WWE United States Champion Roman Reigns as we get a look back at this title win.

Reigns starts off with a promo on how his bloodline has dominated WWE for a long time but never won the United States Title until now. Reigns says that’s because he’s The Guy and he comes out to represent his family on a nightly basis… the music interrupts and out comes Lana.

A “thank you Lana” chant starts. Lana says Rusev doesn’t know she’s out here. Reigns isn’t buying that. Lana says Rusev is challenging Reigns to a rematch. Lana goes on and Reigns just smirks at her. Lana gets upset and Reigns says she needs to relax. He tells her to go to the back and send Rusev out. She tells Reigns to go to hell. Out comes Rusev now. Reigns meets him at ringside and they brawl. They bring it in and Rusev blocks a Superman punch. Reigns ducks a superkick but gets the best of Reigns and sends him out. Reigns goes for a Superman punch off the steps but Rusev kicks him. Rusev sends Reigns into the steps and superkicks him over the barrier into the crowd. Rusev grabs the title and stands tall as we go to replays. Rusev’s music hits as he leaves with Lana, standing tall with the title on the stage. He drops the title and turns to leave but Reigns runs from the back and leaves him laying with a Superman punch. We go to a replay. Reigns retrieves his title to a mixed reaction. Reigns accepts the challenge for Hell In a Cell but says it will be inside the Cell.

– We get a video package for TJ Perkins vs. Brian Kendrick. That match is still to come.

Back from the break and the cruiserweights are out. They meet in the middle of the ring for a handshake. Perkins dropkicks Kendrick to the floor. He puts the brakes on before flying out. Perkins dabs. Kendrick comes back in and Perkins backdrops him. The WWE Cruiserweight Champion hits a crossbody for a close 2 count.

Perkins with more big offense. They go to the floor and come back in. Kendrick nails a big boot and turns things around. Kendrick jams Perkins’ fingers into the turnbuckle bars and does some damage. Perkins falls to the floor as we go to commercial.

More back and forth after the break. Kendrick gets to the ropes when the kneebar is applied. Kendrick eventually hits Sliced Bread but Perkins kicks out at 2. Perkins gets out of Kendrick’s submission. Perkins hits the wrecking ball dropkick but eventually taps out to Captain’s Hook for the non-title win.

– After the match, we get replays and come back to Kendrick leaving while Perkins clutches the title in the ring.

– Still to come, a sitdown interview with Seth Rollins.

– Back from the break and we get Cole’s interview with Rollins. Regarding the rib injury, doctors advised him not to come to LA for RAW but here he is. Rollins says Kevin Owens won the WWE Universal Title but he didn’t beat him, he was handed the title by Triple H. Rollins says he deserves a rematch, especially after Clash of Champions. Rollins says Triple H can’t really replace him with Owens. His eyes are wide open now and he sees things completely differently. He’s going to tear the machine down piece by piece and that starts with Owens. If he gets his rematch, Rollins says he’s going to cancel The Kevin Owens Show and prove to the entire world that he’s still the man.

– We go back to the announcers. Owens will respond to Rollins’ comments later tonight. Back to commercial.

– Back from the break and Cole talks about WWE’s new “More Than Pink” campaign with Susan G. Komen.

We go to the ring and out comes Braun Strowman. Byron is in the ring with Braun’s opponent, enhancement talent Chase Silver. He says he just moved from Idaho to Hollywood, where your dreams come true, and he had a dream that he beat Braun.

– After the match, Braun stands tall as we go to replays. Saxton enters the ring for comments after. He asks what’s next for Braun. Braun says he’s the gift of destruction and his talents are being wasted on weak fools. Braun says if Mick Foley doesn’t get him real competition by next week, there might not be a next week. Braun’s music hits and he makes his exit.

– Still to come, the RAW Women’s Title is on the line in the main event. We see Sasha Banks backstage warming up. Bayley appears. She wishes it was her going out there but she can’t think of anyone more deserving than Sasha. Sasha says she’s going to make history tonight when she dethrones the wannabe queen and takes control of the division. Bayley wishes her good luck.

– Still to come, Kevin Owens responds to Seth Rollins. Back to commercial.

– Back from the break and Rusev vs. Reigns is confirmed for the Cell.

– We go to the ring and out comes Chris Jericho with WWE Universal Champion Kevin Owens. Owens cuts a promo on Seth Rollins, saying Michael Cole sucked in their interview. Owens talks about how Rollins lost and doesn’t deserve a rematch. Owens says if Rollins does weasel his way into a rematch, Jericho should be the special referee. Jericho says that’s not a terrible idea but Owens may be thinking a bit short-sighted as he’s had ideas of his own. Jericho realized they’re the best tag team in WWE after their win over Enzo Amore and Big Cass last week. Jericho thinks they should challenge RAW Tag Team Champions The New Day. Fans chant “yes!” and Jericho tells them to shut up.

Owens thinks Jeri-KO as champions sounds amazing but Cesaro and Sheamus already have a title shot lined up. More back and forth with Jericho trying to convince Owens. Jericho says it’s not like he’s asking Owens for a shot at his title. Fans pop and chant for Jericho. Owens gets onboard with the tag title idea. The music hits and out come The New Day.

Kofi Kingston says he, Big E and Xavier Woods have the best friendship in WWE. Jericho adds them to The List. The two teams trade shots and Woods makes a joke on Owens’ weight. The New Day says Owens and Jericho can have a match but it will have to wait because Jericho and Owens aren’t dressed to wrestle.

– We see video from earlier today where Sheamus and Cesaro arrived together arguing.

– Still to come, Sasha vs. Charlotte. Back to commercial.

Back from the break and out first comes Sami Zayn. Titus O’Neil is out next.

We get a sidebar video from earlier today with Titus announcing The Titus Brand, where everything is Titus and Titus is everything. Sami ends up getting the win with a Helluvas Kick.

– Foley is backstage with Sheamus and Cesaro. He tries to get them fired up and on the same page for their tag team title shot.

– Still to come, Luke Gallows and Karl Anderson in action. Back to commercial.

Goldust and R-Truth vs. Luke Gallows and Karl Anderson

Golden Truth start the match off with some double teaming on Anderson. Anderson looks to turn it around on Goldust but can’t until Gallows offers assistance. Gallows comes in and unloads on Goldust in the corner. Truth gets a hot tag and gets some offense in. The end comes when Truth gets double teamed and hit with Magic Killer.

– After the match, Anderson and Gallows stand tall as we get replays. Goldust comes in to check on Truth but Anderson kicks him and sends him into a big boot from Gallows. They hit Goldust with Magic Killer and leave him laying.

– Back from the break and Enzo Amore and Big Cass are in the ring with a table and three breast cancer survivors. The women actually won a contest back in May and are presented custom title belts. Cool segment.

– Still to come, The New Day vs. Jericho and Owens. Back to commercial.

The New Day vs. Chris Jericho and Kevin Owens

Back from the break and Masterson and Kutcher are on commentary. Back and forth to start the non-title match until Jericho and Owens take control. Xavier Woods makes a comeback and hits a nice clothesline for a 2 count.

Big E comes through the ropes off a tag but Owens attacks him. Big E turns it back around but misses a shoulder trust. Owens hits the ring post and in comes Jericho. Jericho is bleeding from the nose as he dropkicks Big E and talks trash to Woods. Owens gets cheap shots in on Big E as the referee is distracted. Cole says Kofi isn’t wrestling tonight because of the staples in his head from last week. Big E catches Jericho coming off the top for a 2 count. Owens comes in and hits a corner cannonball. Big E kicks out at 2.

The end sees Woods and Big E hit Midnight Hour after Seth Rollins runs down and distracts the heels.

– After the match, Rollins hits a Pedigree on Jericho.

– Backstage segment with Tom Phillips, Dana Brooke and Charlotte. Charlotte says she will expose Sasha’s shortcomings and make her history after tonight.

– Back from the break and Stephanie McMahon approaches Seth Rollins, wondering why he’s here because he’s not cleared to wrestle. Rollins isn’t going to listen to her anymore. Rollins says the second biggest mistake Triple H made was costing him the title and the first was marrying Stephanie. Rollins threatens to burn RAW down if he doesn’t get his title shot.

– We get a promo from Tony Nese.

Nese wins a good back and forth match with a pump-handle driver.

– Sheamus and Cesaro are backstage walking. Back to commercial.

– We get a promo for Emma’s return.

Cesaro and Sheamus vs. Mark Carradine and Raul White

Sheamus and Cesaro pick up another easy win over enhancement talents.

– Back from the break and we get a video package for tonight’s main event.

– Charlotte and Dana are backstage walking. They see Bayley and start mocking her. Charlotte walks off but Dana stays behind to continue humiliating Bayley. She tries to punk her but gets beat down.

We go to the ring and out first comes Sasha Banks for the main event. Back to commercial.

Back from the break and out comes RAW Women’s Champion Charlotte. Cole says Dana Brooke is backstage receiving medical attention. We get formal ring introductions from JoJo.

They go at it to start. Sasha hits an early dive and stands tall on the floor as we go back to break.

Charlotte gets frustrated now and yells at Sasha to stay down. Sasha ends up catching Charlotte in the Banks Statement out of nowhere. She turns it into a pin attempt but Sasha goes right back into the submission. Charlotte taps for the win.

– After the match, Sasha celebrates with the title as Charlotte rants about it being her title. We get replays. RAW goes off the air with the new Women’s Champion celebrating.