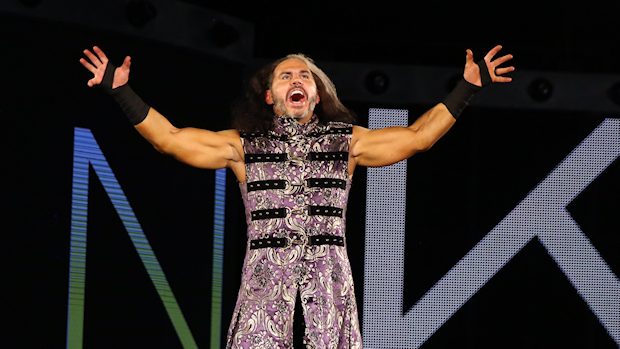 It’s quite possible that Matt Hardy has wrestled his last match in WWE.

Over the past few weeks, Matt has been sending cryptic tweets that left some to wonder about his status with WWE. In a tweet on August 4, Matt posted a video clip of a move he did with brother Jeff called “Event Omega.” He added that doing the flying leg drop “is most likely the reason that I’ve recently learned that my lower back and pelvis have started fusing together.”

On August 13 on Raw in Greensboro, North Carolina, Raw Tag Team Champions The B-Team beat The Deleters of Worlds and The Revival in a Triple Threat Match.

Following the show, Matt indicated on Twitter that his partnership with Bray Wyatt is over.

Dave Meltzer reported last week in the Wrestling Observer Newsletter that Matt is taking time off from wrestling to address his lingering injuries. Matt and Wyatt’s loss to The B-Team on Raw was meant as the blowoff of their partnership in WWE.

While Matt’s pain isn’t terrible, it is frustrating for him. Matt is undergoing treatment for his variety of injuries and after he goes through that process, a decision will be made as far as whether he can resume wrestling again for WWE and in what type of a schedule or capacity.

If Hardy isn’t cleared to wrestle, it’s quite possible that he takes on a behind-the-scenes role. There is talk of him shadowing producers backstage so that he can possibly become one himself.

Couple these reports with Matt’s repeated cryptic tweets and that has led many to believe he’s considering retirement. Last week, Matt’s wife Reby appeared on Busted Open with hosts Dave LaGreca and Mark Henry, who asked her how he’s doing.

EXCLUSIVE: @RebyHardy confirms to @davidlagreca1 & @TheMarkHenry that @MATTHARDYBRAND contract with the WWE is up this March, weighing options on future including a possible role backstage.#SummerSlam #RAW pic.twitter.com/vgARTrcyqW

“Matt is good. Matt is right now going through a bit of a transitional period. He’s not really sure what he’s going to be doing. His contract is up in March, which I’m not sure many people are aware of,” Reby said.

“But there’s sort of a decision to be made at this point as to whether or not he should continue his in-ring career or if he should pursue something different, which he would totally be up for and would be excited to do, I feel like. So he’s kind of giving it a go right now backstage.

“He’s at SummerSlam. He’s not on the card but he’s there and we’re kind of going to see from here. It’s really a transitional time right now.”

Reby later says she hopes he decides to go the route of working backstage because there’s only so much the human body can take after taking so much punishment for so many years.