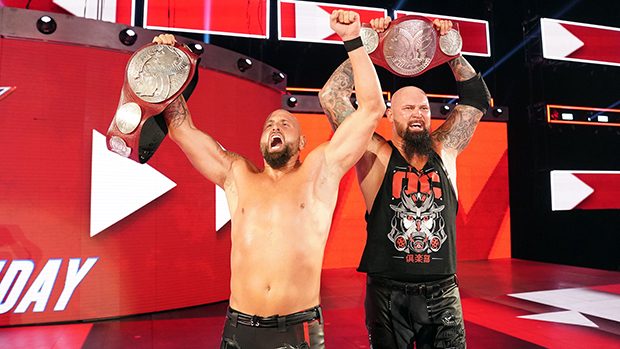 The O.C. won the titles tonight on Raw from The Revival in a Triple Threat Match that included The Usos.

In the closing moments of the match, Gallows gave a blind tag to Dash Wilder, which The Usos were unaware of. After Anderson planted Jey Uso with a spinebuster, The O.C. nailed Jimmy Uso with the Magic Killer. Moments later, new Raw Tag Team Champions were crowned.

With the victory, all three members of The O.C. now hold a title since AJ Styles is the reigning United States Champion. The newly-crowned champions celebrated with Styles backstage shortly after.

The Revival held the Raw Tag Team Championship for 49 days, defeating Curt Hawkins and Zack Ryder on the June 10 episode of Raw. This is the second time Anderson and Gallows have held the Raw Tag Team Championship, previously winning the titles at Royal Rumble 2017. They dropped the titles 63 days later to The Hardy Boyz in a Fatal 4-Way Elimination Ladder Match at WrestleMania 33.