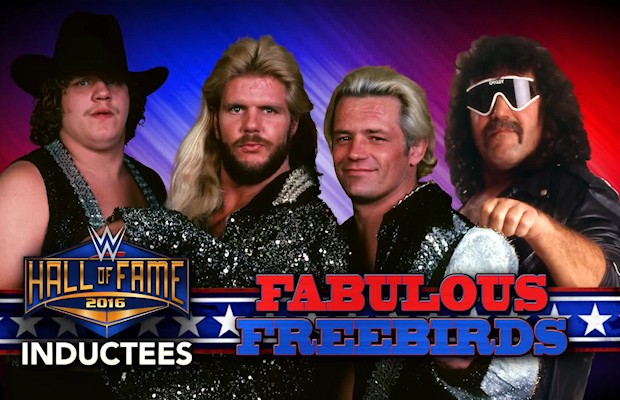 – 2016 WWE Hall of Famer Michael “PS” Hayes recently spoke with The Pensacola News Journal to promote The Fabulous Freebirds getting inducted next Saturday night. The full interview can be found at this link. Below are highlights:

Coming up under The Wild Samoans and meeting Freebird Terry Gordy:

“Afa and Sika (Anoa’i) had so much to do with my growth. When they were helping me out, they kept telling me about this guy that was younger than me and he was awesome. Turned out that the guy was Terry Gordy. He was destined for stardom at a young age. It was destiny for us to get together.”

Some of his most memorable moments:

“The cage match with JYD in August 1980 stands out huge in my mind. There were many huge moments. I loved working with JYD. I loved him, and I miss him. But thinking about our feuds and our moments, it’s hard to pick one. If I had to say one, I’d say the first (Von Erich Memorial) Parade of Champions, when Fritz (Von Erich) came out of retirement to wrestle us. If I had to say just one match, which is really hard to do, it’s hard to beat that one. Also that night, we debuted the Bad Street (music) video. It was a huge weekend.”

Going into the WWE Hall of Fame next weekend:

“Jimmy Garvin said one time that Terry Gordy was God’s gift to wrestling, and I believe God gave me a gift to do what I’m doing. Sometimes you don’t enjoy the journey, you’re just so consumed with getting to the destination. Now I enjoy the ride a lot. I’m enjoying this ride. There is no telling the sea of emotions that will hit me when I take that stage (for the induction).

“I’m sure it’s going to get emotional, thinking about Terry and Buddy. I have a million ideas what I want to say. Everybody is anticipating the speech and what we’re going to do and what I’m going to wear. I can tell you that I will not disappoint. Like always, it will be a show. I’m going to let a lot of if flow freely. We come from an era where we didn’t have scripts and I won’t on that night. I’m proud that Terry’s son and Buddy’s son will speak for their fathers. That will be awesome. It will be extremely emotional night. You have to feel the crowd and go with it.”

Related ItemsWWE Hall of Fame News
← Previous Story Roman Reigns On If He Wants a Match with The Rock, Why Fans Still Boo Him, His Entrance
Next Story → Sasha Banks Gets Magazine Cover, Snoop Dogg WWE HOF Video, Referee for Brock Lesnar vs. Dean Ambrose