Whatever Happened To Nailz? 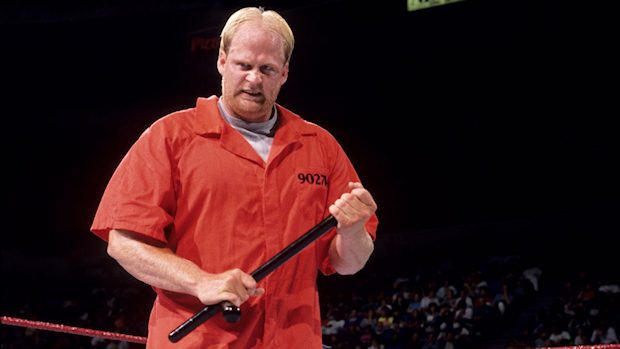 This is one former wrestler who you can bet that WWE won’t be wishing a happy birthday to.

Wacholz is believed to be living in Bloomington, Minnesota these days, where he was born. While we never saw him during the Monday Night War, he was actually under contract to WCW during that time period and amazingly collected a six-figure salary for a few years. He only wrestled one match while under contract to WCW, which was exactly 20 years ago today at a house show in North Dakota, beating Barry Darsow. Since that match, he apparently hasn’t wrestled or even appeared at a convention. Interestingly, there is a Nailz fansite registered to his real name, which is located at Nailz902714.com.

For those unfamiliar with Nailz, here is how the WWE Encyclopedia describes his character and brief run, which started in spring 1992:

“After serving hard time in a Cobb County jail, Nailz made a beeline for WWE, where he immediately attacked his former prison guard, Big Boss Man. The ex-convict was so intent on exacting revenge from Boss Man, in fact, that he didn’t even bother to change out of his orange prison jumpsuit. Instead, he wore the state-issued garb throughout the entirety of his brief WWE career.

“The hardened criminal made short work of Virgil at SummerSlam 1992. Three months later, he finally had the opportunity to gain the upper hand from his former prison guard when the two Superstars battled in a Nightstick Match at Survivor Series. Boss Man ultimately proved his dominance that night and Nailz disappeared from WWE shortly after.”

The Nailz character had a distinctive, intimidating voice. In reality, Wacholz had a higher pitched voice with a strong Minnesota accent. Here is a rare video of him doing an interview in his real voice at an indie show, which pretty much explains why his voice was completely altered.

Wacholz’s run in WWE ended in December 1992 after he allegedly attacked Vince McMahon in his office over a financial dispute. Bret Hart recalled in his autobiography that Wacholz “cornered Vince in his office and screamed at him for fifteen minutes.” Hart claims he was just down the hall from the office when he heard a loud crash, which was Wacholz “knocking Vince over in his chair, choking him violently.”

Many wrestlers were privately calling him a hero because up until that point, he was apparently the only wrestler to attack Vince McMahon (Bret Hart became the second immediately following the Montreal Screwjob).

Wacholz later alleged that McMahon ordered him to take steroids, which McMahon denied. He also sued him for wrongful termination, and WWE countersued him. Both lawsuits were later dropped. In May of 1993, WCW hired Wacholz for a one-time surprise appearance against Sting. He was billed as The Prisoner, from Green Bay, Wisconsin, which was an inside rib on McMahon since that’s where the assault took place.

Wacholz is very important in the history of Vince McMahon, and not just because he was assaulted by him. When Wacholz claimed that McMahon ordered him to take steroids (likely not true), he was brought in as a witness in the government’s steroid trial against Vince McMahon in 1994. Wacholz gave what was believed to have been a testimony that wasn’t credible, including saying on the stand that he hated Vince McMahon’s guts. The testimony was very damaging to the prosecution, and some say it was his statements, and their lack of credibility, that led the jury to not convict McMahon when it came time for the verdict.

He signed a contract with WCW in 1997 because Eric Bischoff knew him from the AWA in Minnesota and liked that he had attacked McMahon. According to a report by Dave Meltzer in the Wrestling Observer Newsletter in early 1998, WCW officials considered having him join the nWo, but it never came to fruition. He worked one match 20 years ago today at a non-televised event and was never used again. He was apparently released in May 1999 when WCW officials were looking to cut costs and remembered he was on the payroll making about $150,000 on an annual basis.

Related ItemsFeatured
← Previous Story Apollo Gets His Crews Back, Mike Kanellis Vows To Fight For His Family On Raw, WWE Music Top 10
Next Story → Who Is Backstage At SmackDown? – Potential Spoilers