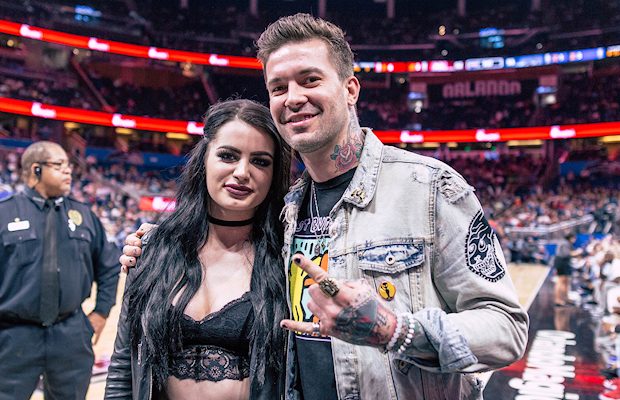 Kalan Blehm is a bass guitar player and backup vocalist for the metalcore band, Atilla.

On February 8, Paige went public with their relationship by sharing a photo of the two sitting courtside at an Orlando Magic game.

Blehm shared the same photo and referred to Paige as “my girl.”

Paige and Blehm apparently decided to make their relationship public after the official Instagram account of the Orlando Magic posted these photos of the couple at the game.

They began dating as early as November 2017 as it was around that time Blehm began appearing on Paige’s frequently updated Instagram Story. The relationship fell under the radar since Paige tends to hang out in groups and with people from outside of wrestling that most WWE fans wouldn’t recognize.

On the October 10 episode of Total Divas, Paige confessed to cameras that Blehm is her boyfriend but she’s trying to keep their relationship under wraps. To complicate matters further, Nia Jax is eager to set Paige up with her brother.

Jax, however, became suspicious about Paige’s love life since she previously spotted Kalan walking around the retired wrestler’s home.

Paige then revealed she was able to squash Jax’s suspicions by calling Blehm the “maintenance guy.”

“Think it’s that time in the relationship where you might start telling your friends what’s going on?” Blehm asked Paige. “It’s strange, it’s a little strange.”

Paige left viewers wondering if she’ll be able to keep her new boyfriend a secret for much longer. Paige doesn’t think she’s “ready” to reveal the truth and wants to be “alone” with Blehm for the time being.

Paige and Blehm are no longer together, according to WWE personality Charly Caruso.

“The other day [I was speaking to someone in WWE], oh, it was with Paige cause she just broke up with her boyfriend somewhat recently,” Caruso said on Chasing Glory with Lilian Garcia (h/t RingsideNews.com).

“I told her, ‘You know every guy says they want this strong confident woman and that’s what they love about you and it’s only a matter of time in a lot of situations where then they start resenting you for that and they can’t keep up with you or they don’t like that you’re so dominant or you know, so successful because it makes them feel less secure.'”

Their breakup had been rumored for the past few months as Paige removed many Instagram photos of herself with Blehm. We haven’t heard of her dating someone new.

Paige dated a musician before as she was in a relationship with A Day to Remember guitarist Kevin Skaff for about a year (from late 2014 to late 2015). Paige’s relationship with Skaff was a major storyline on Total Divas and she was even shown breaking up with him over the phone.

In this video, Paige explained why she broke up from Skaff.

“I was just like, ‘Yeah, I don’t know, I just didn’t feel like I wanted a relationship right now,'” Paige told her friend Danielle. “But I told him right from the start, ‘I’m not very good at relationships. It’s not as if I’ll cheat on you, but I get freaked out quick and I wanna leave.'”

They had gotten engaged a few weeks earlier and that’s when their relationship went south. Likewise, Paige and Del Rio planned to get married in the summer of 2017, but when it didn’t happen, they broke up shortly thereafter.

Click here to see more photos of Paige and Kalan together.

Related ItemsFeaturedPaige News
← Previous Story When Does AJ Styles’ WWE Contract Expire?, Segment Announced For SmackDown LIVE, Sasha Banks Video
Next Story → A Change Could Be Made To A Match At WWE TLC, The Most Brutal Singh Brothers Beatdowns, Kane Sings