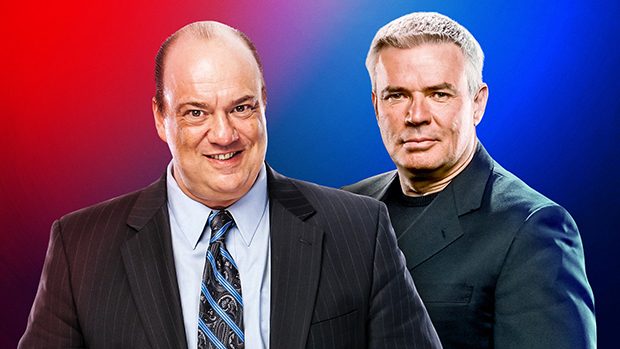 WWE is turning to two of the most influential figures in professional wrestling history to oversee Raw and SmackDown LIVE.

WWE.com then posted a story officially announcing the news. WWE states that Heyman and Bischoff “will oversee the creative development of WWE’s flagship programming and ensure integration across all platforms and lines of business. The creation of these roles further establishes WWE’s ability to continuously reinvent its global brand while providing two distinct creative processes for its flagship shows.”

Sports Illustrated reports that the positions are full-time executive roles and WWE has “no plans at the current time for this to be introduced as part of a TV storyline.”

While Heyman appears on television as Brock Lesnar’s advocate, he has also been working behind-the-scenes to assist wrestlers with character development.

This marks a full-time return to WWE for Bischoff, who hosts the “83 Weeks” podcast with Conrad Thompson. Bischoff being named the Executive Director of SmackDown comes in advance of the show moving to Fox this October. Sports Illustrated said Bischoff will also work directly with Fox executives.