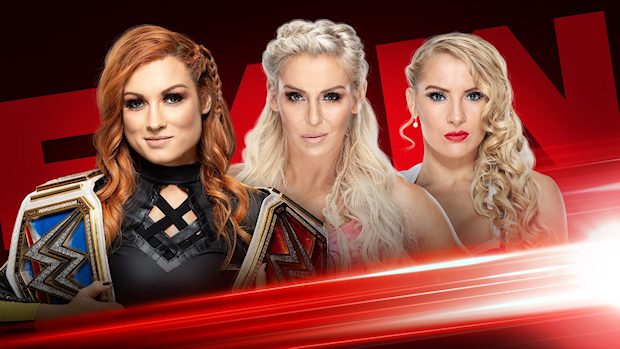 It’s that magical time of the year when WWE travels to Europe and we get some information in advance which helps us decide if we want to spend three hours with Raw on a Monday night.

Team Red is in London’s O2 Arena for the May 13 episode of Raw. Thanks to the five hour time difference between the United Kingdom and the East coast of the U.S. of A., that means advance reports about what goes down on a show which is scheduled to feature Becky Lynch signing contracts for her upcoming title defenses against Lacey Evans and Charlotte Flair, Roman Reigns appearing on Miz TV, the final build for this Sunday’s WWE Money in the Bank pay-per-view event, and more.

Here are spoilers for tonight’s show.

– An “international edition” of Miz TV kicks us off. He briefly hypes his match with Shane McMahon this Sunday along with the ladder matches, then welcomes his guest, Roman Reigns. Elias cuts The Big Dog off, but Reigns runs down his Money in the Bank opponent by calling him a wedding singer, etc. Miz speaks passionately about his rematch with Shane, which brings out McMahon. Bobby Lashley and Elias jump the babyfaces, and Shane books a tag match.

– The Miz and Roman Reigns defeat Elias and Bobby Lashley via DQ when Shane McMahon interferes to keep Miz from tagging Roman. Reigns takes out McMahon.

– Braun Strowman meets with Shane McMahon and learns he has a match with Sami Zayn tonight. If Sami wins, he takes Strowman’s spot in the ladder match this weekend.

– Nikki Cross is backstage as Alexa Bliss struggles with baggage issues. Cross is completely calm and composed. Because of Bliss’ luggage trouble, Nikki is replacing her in tonight’s Fatal 4-Way Match.

– Becky Lynch, Charlotte Flair and Lacey Evans are out for the Women’s title contract signings. The crowd is said to be hot for The Man. Lynch runs them both down as “dopes,” saying Evans can’t afford to lose her first title shot, and Charlotte can’t afford to lose her “millionth.” O2 Arena crowd “WHAT?”s Flair, but she isn’t flustered. Things break down, and the challengers end up putting Lynch through a table.

A fantastic reception for @BeckyLynchWWE from the @WWEUK universe in London as we get a double contract signing on #Raw #Becky2Belts pic.twitter.com/2X9kxEqwVp

– Baron Corbin def. Ricochet via pinfall following End of Days. Described as a clean win. Afterward, Corbin grabs a ladder and climbs it, cause reasons. The One And Only shoves him.

– Backstage scene where Cesaro jokes to Rey Mysterio that his son Dominick looks like Samoa Joe leads to a brawl between Mysterio and Cesaro.

– AJ Styles promos from backstage about his Universal title shot at Money in the Bank.

– Nikki Cross def. Natalya vs. Naomi vs. Dana Brooke. Cross portrayed the same psychotic character. Following the match, Cross and Alexa set up a ladder and Cross helps Bliss claim a Money in the Bank briefcase hanging above.

– Dash Wilder & Scott Dawson cut a promo backstage, calling out The Usos and vowing that “the embarrassment of The Revival stops”.

– Seth Rollins gets a backstage interview talking about his match with Styles this Sunday.

– Sami Zayn def. Braun Strowman to take his spot in Sunday’s men’s Money in the Bank ladder match. They brawled into the crowd, and Baron Corbin joined in to try and help Sami beat the Monster. Drew McIntyre also gets involved, DDTing Strowman onto a chair, but he still won’t stay down for a three count. They eventually overwhelm him though, and allow Zayn to get the pin.