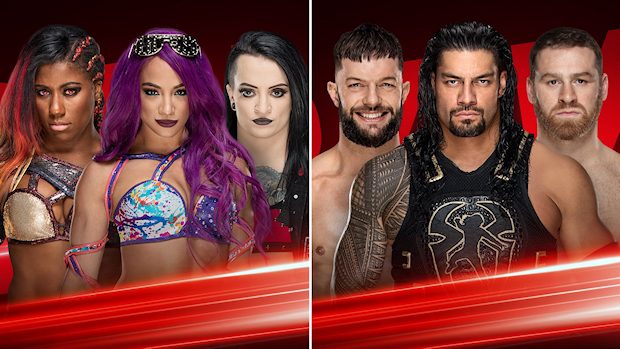 WWE confirmed on tonight’s RAW that there will be two Money In the Bank Ladder Matches at the June MITB pay-per-view – one for the men and one for the women. It was also confirmed that there will be four RAW Superstars and four SmackDown Superstars in each match. There had been some speculation on WWE holding three MITB Ladder Matches at the pay-per-view due to three briefcases being featured on the promotional poster but there will be just two, unless another match is added later for the tag team division or the cruiserweight division.

The 2018 Money In the Bank pay-per-view takes place on June 17th from the Allstate Arena near Chicago in Rosemont, IL. Below is the updated card coming out of tonight’s RAW:

Men’s Money In the Bank Ladder Match
Braun Strowman vs. Finn Balor vs. 6 Superstars TBA (2 from RAW, 4 from SmackDown)

Women’s Money In the Bank Ladder Match
Ember Moon vs. 7 Superstars TBA (3 from RAW, 4 from SmackDown)