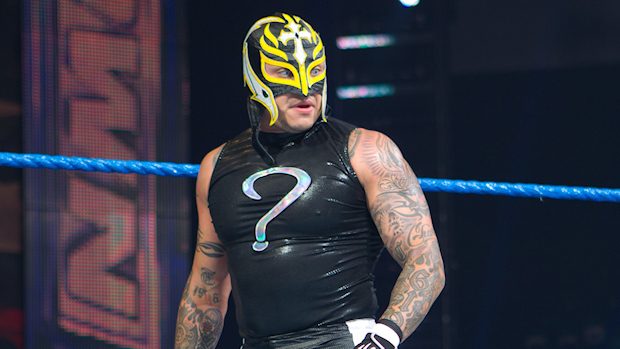 – A return to WWE has been rumored for Rey Mysterio since he was a surprise entrant in the 2018 Men’s Royal Rumble Match in January and it will finally happen next week.

WWE announced this week that Mysterio will square off with United States Champion Shinsuke Nakamura in a WWE World Cup Qualifying Match on next Tuesday’s historic 1000th episode of SmackDown LIVE in Washington D.C. Mysterio is advertised to wrestle twice on the show as WWE revealed tonight in an email to those in the D.C. area that he will also compete in a tag team match.

In updated advertising for the event, Mysterio is slated to team with WWE Champion AJ Styles and Daniel Bryan against Randy Orton, The Miz, and Nakamura. A match pitting Styles and Bryan against Samoa Joe and Miz was previously advertised.

WWE also noted in the email that Flair will go one-on-one with SmackDown Women’s Champion Becky Lynch (after previously advertising Flair, Asuka, and Naomi vs. Lynch and The IIconics). This is presumably a dark match since they’re scheduled to face off at Evolution in a Last Woman Standing Match.

– After wrestling at WWE Super Show-Down last Saturday in her home country of Australia, Peyton Royce reflected on her long journey from the independents.

In Melbourne from wrestling in a Chinese restaurant called The Dragonfly, to the Thornbury Theatre to the MCG!! 2012-2018 what a ride! I’m not ready to move on yet. Super ShowDown was a feeling I never want to lose!! Every goal has its hardships & it’s spectacular moments. It’s all part of the journey & makes it all worth while! Keep pushing forward ??

Royce also revealed that she would spend thousands of dollars on professional photos hoping it would land her a tryout with WWE.

Throwing it back! I spent thousands of dollars (when I was working 2-3 jobs) to get the best photos taken so I could send them in to WWE hoping I’d be lucky enough to get a tryout. I think I was 22 in these photos. Not so sure age has treated me well ?? An Icon in the making ??

Royce and fellow Australian Billie Kay beat Naomi and Asuka in a tag team match, with Royce scoring the pin on Naomi.