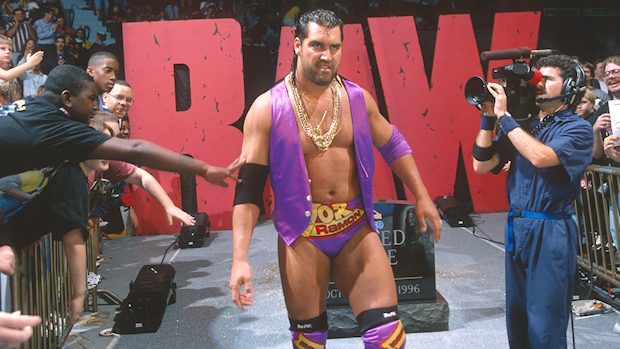 Rick Titan is best known for bringing the Razor Ramon character back to life in September 1996 after Scott Hall famously defected from WWE to World Championship Wrestling. In an interview with The Two Man Power Trip of Wrestling podcast, Rick shares some amazing insight into the backstory and creation of the most famous doppelganger in wrestling history. We also find out how Rick has changed his life following his time in wrestling and what he’s doing now.

Being scouted by WWE while working for ECW in 1996 as Rick Titan and being asked to play Razor Ramon:

“At that time one of the WWE referees had seen me do this character and he thought it was great and he told Vince about it. I had been hanging out a bit with Bret Hart in Calgary and Bret got me a tryout as Rick Titan and that went quite well as a real vicious heel but Vince called me up after a few weeks later and said that the people want Razor Ramon back and I own the trademark and the copyright and I want you to be my new Razor Ramon. I had mixed emotions because I was excited to get into the WWE and that had been a ten year goal for me by that time and I had finally gotten an opportunity to do it and if I say no to this I may never get in there because he (Vince) might be spited by it and that is it for me in the U.S. So I said yes to it and I asked him if we could transform it into something else and if we can evolve it into something else and maybe change the character’s name a bit and put long pants on it and make it like an Antonio Banderas ‘Mexican’ type character and make it a little more evil. I tried to think of different ways to make it my own character because I had a pretty good feeling that people were going to reject it.”

First impressions of being paired with Glenn Jacobs (aka Kane), who worked alongside him as Diesel:

“He’s a hard worker. We got along fairly well and I probably had done some things like in Canada at the time they didn’t have a lot of size 13 shoes and suits that would fit a guy my size and fit quite nicely so one time I asked him to stop at this clothing store and we were trying to get to the arena as well so we were in a bit of a time crunch and I spent probably close to an hour or more buying the clothes because I was so excited to find stuff that fit but man was he pissed when I got out. He wouldn’t talk to me for the next day or so because I had disrespected his time. Back then if you look at him he’s got that big furrowed eyebrow and he’s got the big huge jaw and he’s 320 pounds of pure muscle and I’m quite sure he knew how to really fight which I can’t say for all the guys who had been through WWE. They are good at having a match but if you got in a real fight with him it would probably be over in a couple of seconds.

“He was a consummate professional. I always had a little bit of trouble memorizing high spots and for some reason my brain doesn’t work all that well in that way and to be able to do 15-20 moves in a row and especially in a tag team with more than two guys in the ring I’d mess things up once in a while but Glenn was a perfectionist. He was like a mathematician when it came to that. He always wanted it done perfect. He was a good guy and we got a long quite well for the most part I think and it is one of those thing as to why I am a coach and why I do public speaking, I kind of like to be transparent and I like other people to be transparent with me and he didn’t like to open up a lot so a lot of times it was tense for me.”

His debut on Monday Night Raw alongside Jim Ross:

“I thought that it was really cool. All the lights and the fans and that being my dream since I was a 15 or 16 year old boy to do that. The flip-side of that was, ah crap I have to do it in this character. Nobody is going to accept this character and if I had come out as Rick Titan and kicked someone’s ass I’d either be either getting heavily booed or really cheered. But I knew that. Just doing the glide past the fans and them reaching out and trying to touch me and me moving my arm away as to say, don’t you touch me. It was a lot of fun.

“I knew the commentators were going berserk at the table and I could hear that and that was sort of dream-state like and the Razor Ramon character I always really liked it. I thought it was cool from the moment it came out and I remember Scott in those original vignettes and he was a lot bigger and a lot stronger then. I always thought it was a cool character and if I could play a cool character that would be the one I wanted to play. But a lot of mixed emotions and I mean like extreme from one to the other. But I thought I pulled it off pretty good and to me if it had been given a chance and maybe if they hadn’t lied or hinted that the originals were coming back but said that they had someone new or that we do own the trademarks and the copyrights and the costumes and the name but we are putting it on a younger guy who is bigger and stronger and just had me be a nasty heel and just cheat and be ignorant and have good long interviews (because I can speak) instead of these quick one sentence thick accented cliché promos that they had me doing it might have worked. Chances are probably not, but it might have.”

Did Shawn Michaels approve of the Razor Ramon and Diesel angle?

“It was really interesting because I thought he would just treat me like a bag of crap when I went in there and I had heard rumors of him having a bit of an attitude and being a problem. I know Bret and him had some heat and I was friends with Bret and I thought that this guy is going to be a real jerk.

“The way I threw a punch was very ridged and power based and Scott Hall was very loose and floppy and relaxed and it is a big difference in physicality and if anyone can take some real credit for having taught me how to do a couple of things, I would say it was him. He was so polite about it and I was shocked. The blood about drained out of my face and I couldn’t believe it because he was one of my idols too when I was watching before I broke in.

“To me that was almost one of the peaks of my career I’d have to say because I have so much respect for him. He had done it so gentlemanly and it was just really cool. We never had any heat and we never had any problems and I don’t know that maybe he did think less of me because of the whole takeover thing but I actually think he had some compassion where he thought that I’ve been in lousy spots before in my career and this poor guy is trying to make it. I think he was pretty good hearted about it.”

Moving on from wrestling and becoming a “transformational speaker”:

“By the time I got into WWE it was Barry Windham who always used to say that this business will jade you. I’d always be thinking what is he talking about? I was having a great time and sure enough within a few months of that I thought I get it, this business will jade you and will turn you dark inside sometimes and makes you put a big block up. When fans aren’t treating you properly and are not respecting your athletic ability or your acting ability because I think I pulled off the accent of the Razor Ramon character and being a powerlifter and being quite a bit stronger than Scott Hall and some of the feats of strength I did in the ring I did really well and I feel like I should have gotten some more respect for that.

“I thought that I had to be mean spirited to make it in that business because if you are soft than you let people walk all over you then you are not going to make it. Originally I wanted to change myself and I really wanted to be a happy person and I wasn’t happy inside. It made me do some real soul searching, I felt like a really mean guy sometimes and I am pretty rough around the edges and don’t trust any people. At the age of 29-30 it was a really hard go and I was angry with myself and I was pent up and I was stressed out and frustrated and originally it was a selfish thing. I started reading Taoism, I started reading Hinduism, I started reading on some yoga philosophies and the 8 limbs of yoga and I studied with a Buddhist monk for about 4 1/2 years. After a while I started wanting to share it with other people because I thought that even though you might have a normal lifestyle a lot of them were in a similar place where I was and that is kind of the rant in a nutshell of life after wrestling.”

You can listen to the interview in its entirety here.