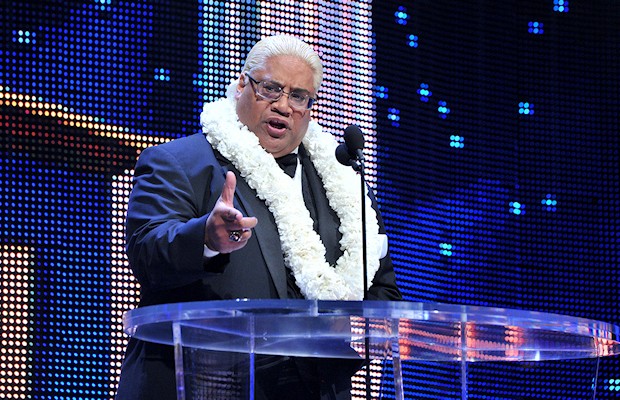 – WWE Hall of Famer Rikishi recently spoke with Chris Featherstone of FOX Sports to talk about his Territory League promotion, cousin Roman Reigns and WrestleMania 32. The full interview can be found at this link. Below are highlights:

Fan reactions to Reigns and WWE dropping the ball by not turning him heel:

“All due respect to the fans. Without the fans, there is no Roman Reigns. Without the fans, there is no Samoan Dynasty, there is no Triple H, there is none of us. So the fans are entitled to their opinion. Again, let’s keep in mind, this wave that’s going through Roman Reigns at the time, he’s not the first, nor will he be the last. He is who he is. As far as the rumors about him not being able to wrestle, well I beg to differ, because I know that he comes from a bloodline that’s called Samoan Dynasty, Anoa’i strong. We all know how they wrestle and I think and know that we do it very well.

“I feel that, in due time, you’re gonna see Roman Reigns become Roman Empire. Let’s take it back to John Cena and Rock back in the day, when people felt like they was just shoved down their throats. Eventually, they earned the people’s respect, and the next thing you know, they were just loved by the whole world. To me, you don’t want to go against the WWE Universe. You never want to do that. To me, what works is to go with the flow. If you hate me so much like that, had it been me, I’d tell Vince, switch me heel right now. Let’s give it to these people. I’d be the baddest frickin’ heel that they’d ever see. And in due time, you would hate me so much, when I do turn babyface, guess what, [you’d love me]. It’s a very simple fix.”

His prediction for Shane McMahon vs. The Undertaker:

“I have to go with Undertaker. We gotta give the respect to the big man. No doubt I think that there’s going to be an entertaining match. Shane with his crazy bumps, who knows what type of bump he’s gonna take for WrestleMania. We’re talking about the Super Bowl of Super Bowls in professional wrestling, and knowing Shane, he’s gonna bring something out.”