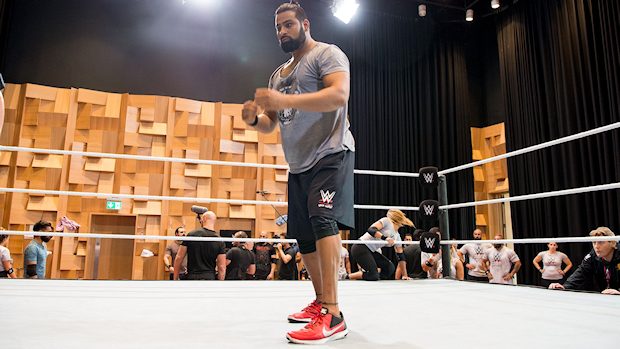 Rinku Singh, whose unlikely journey from India into the world of baseball inspired the 2014 sports film Million Dollar Arm, made his professional wrestling debut at Thursday’s WWE NXT live event in Tampa, Florida.

According to fan Chris Hendricks, who saw the match live, “Ohno worked his tail off trying to make this match functional, but there were too many miscues for [him] to describe.”

Hendricks continued, “I don’t know who this falls on, but no wrestler, not even one as good as Ohno, could salvage this situation. Singh did try hard and showed some good charisma, but all the miscues made Ohno throw a side headlock on many different times to discuss how to get out of a particular situation. It was one of the worst Florida loop matches I’ve seen in the Tampa area, though it was actually interesting in that it made me respect just how hard this form of entertainment is to be good at.

“At one point, Singh went for one small package or cradle after another in such an obvious, repetitive fashion that many found funny. Ohno won after hitting the knockout elbow for the quick pinfall.”

As you can see in the photos below, Singh wrestled in gym shorts and a pair of sneakers instead of traditional wrestling gear. As a result, this had fans chanting “Let’s go gym shorts” at Singh.

This was this fellas first match ever. I believe his name was Reku. He did great! Welcome to da biz! #NXTTampa pic.twitter.com/EFnBCunRxm

Steve Corino, who works as a trainer/assistant coach at the WWE Performance Center and producer at NXT live events, congratulated Singh on his in-ring debut.

Congratulations to @RealRinkuSingh on his #NXT debut tonight.

On January 12, WWE announced via ESPN.com the signing of Singh, a former Pittsburgh Pirates minor league pitcher, to a developmental contract. He reported to the WWE Performance Center in Orlando, Florida on January 9.

Singh won the Million Dollar Arm reality show in his native India in 2008 and was signed by the Pirates. As the first India native to play professional baseball in the United States, he spent the better part of eight years as part of the Pirates’ organization before injuries ultimately put an end to his baseball dreams.

Singh never actually played in the majors as he only competed in the lowest levels of play in Minor League Baseball. His injuries began to mount in 2013, and he had Tommy John surgery in 2014. Singh last pitched in the Pirates organization in 2016 before eventually returning to India to contemplate the next step of his life.

Singh’s rise from javelin thrower to a pitcher was dramatized in the 2014 Walt Disney Pictures sports film Million Dollar Arm, starring Jon Hamm. Singh is portrayed by Suraj Sharma, who gained fame as the star of the 2012 survival film Life of Pi.

In this video posted on Major League Baseball’s YouTube channel in 2014, Singh discussed his journey from a reality show to baseball.

In April 2017, Singh joined 40 male and female athletes from India and the Middle East in an invitation-only tryout at the Dubai Opera House. There, he impressed Performance Center coaches and trainers and earned himself a WWE developmental contract.

In an interview with WWE.com, Singh talked about joining the Performance Center.

“Take a look at where I came from. When I started [playing baseball], there was nothing. Now we have 23 states [in India] playing baseball and softball. As I go through my journey at the Performance Center and WWE, it will continue to make things easier, and I’ll have millions of people in my corner. It’s going to be a fun journey.”