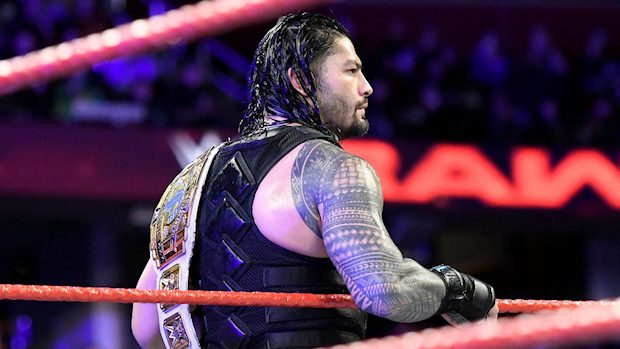 – On WWE.com’s Ticket & Events section, Roman Reigns is not advertised for any of this weekend’s house shows nor for Monday’s Raw in Providence, Rhode Island. Strangely, Brock Lesnar also isn’t advertised for Raw, although he absolutely will be on the show to address Braun Strowman and Kane.

On WWE.com’s preview for Raw, there is a teaser on who might be Reigns’ next challenger for his Intercontinental Championship.

Who will be next to challenge Roman Reigns?

In a hard-fought match, Roman Reigns ultimately defeated Cesaro this past Monday night to retain the Intercontinental Championship. Then, at WWE Tribute to the Troops, The Big Dog celebrated alongside his Shield brothers after scoring a victory over Samoa Joe and The Bar in a raucous Six-Man Tag Team Match.

As Reigns carries his workhorse title to Raw, it remains to be seen who will step up next. Will it be Sheamus or Joe, or will a new nemesis step into his yard?

– Now you can listen to Harper and Rowan’s theme song.

WWE Music has released The Bludgeon Brothers’ theme song, and it is called “Brotherhood.”

– A new episode of Table for 3 will air on the WWE Network after Raw goes off the air and it will feature Finn Balor and The Hardys. Here is the synopsis:

“Finn Balor and The Hardys discuss the motivations behind their most extreme personas and share personal tales of their paths to WWE.”