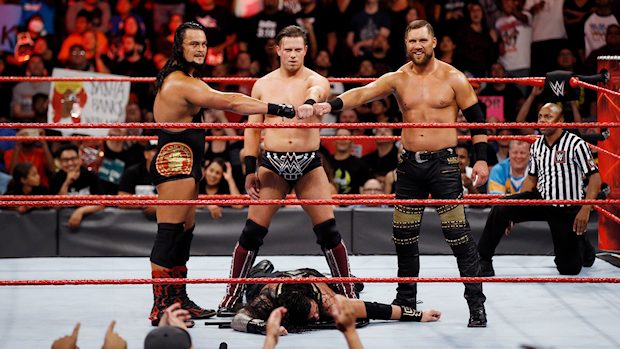 As seen on Raw this week, The Miz, Bo Dallas, and Curtis Axel laid out Roman Reigns and stood over him. Then, in a moment that piqued the interest of the audience, they extended their arms and engaged in the fist bump made famous by The Shield.

Sunday night, during the No Mercy pay-per-view, Pro Wrestling Sheet’s James McKenna took to Twitter with a scoop that will affect WWE programming for the foreseeable future.

wowwww, hearing that to kickstart some ticket sales – they’re planning to give TLC in a month a MAJOR card upgrade. its finally happeninggg. pic.twitter.com/FLE8CWqRM0

McKenna’s report was lent credibility by what happened on Raw.

Miz even mentioned The Shield and suggested that, had The Miztourage been around five years ago, no one would remember the trio of former WWE Champions.

According to Pro Wrestling Sheet’s Ryan Satin, it’s unclear at this point who they’ll be facing. He was told The Miztourage being their opponents is not set in stone at this point.

In a trivia note, The Shield’s first match together took place at TLC 2012 against Ryback, Kane and Daniel Bryan.