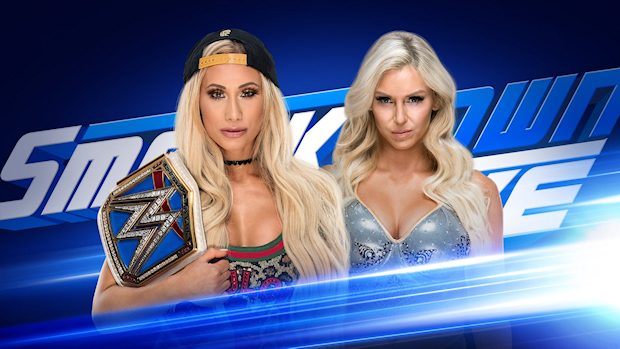 A Six-Woman Tag Team Match and two segments have been announced for tonight’s SmackDown LIVE from the Bell Centre in Montreal, Quebec, Canada.

SmackDown Women’s Champion Carmella will be teaming up with Peyton Royce and Billie Kay against Charlotte Flair, Asuka, and Becky Lynch. This comes after The IIconics got a win over Asuka and Lynch last week, while Carmella and Flair met for a contract signing for their match at WWE Backlash. After Charlotte signed the contract, she knocked Carmella’s head onto the table and flipped it onto the champion.

The tag match comes five days before Charlotte gets her rematch for Carmella’s title at Backlash. Carmella cashed in her Money in the Bank briefcase to win the championship last month after Charlotte got attacked by Royce and Kay.

Another title bout should become official for Backlash as Jeff Hardy appears on Miz TV tonight. Hardy has been involved in a program with Randy Orton and Shelton Benjamin since winning the United States Championship and coming to SmackDown LIVE in the Superstar Shake-up.

WWE is returning to the Bell Centre in Montreal for the second straight night for tonight’s SmackDown. AJ Styles and Shinsuke Nakamura will finish building to Sunday’s WWE Championship Match, with Nakamura demanding an apology for their double count-out and post-match brawl from the Greatest Royal Rumble.