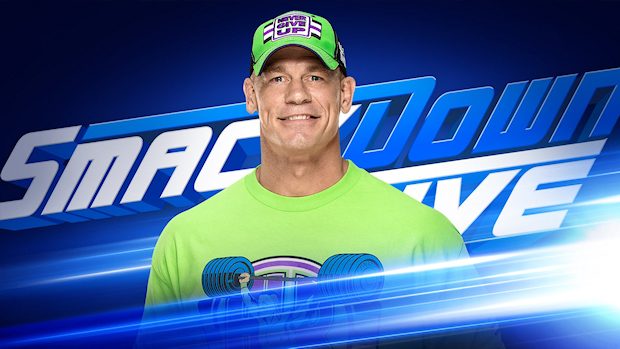 Tonight’s episode of SmackDown LIVE was filmed on Saturday night in Pittsburgh, Pennsylvania at the PPG Paints Arena. Here are complete spoilers for the show.

— The New Day out. They declare themselves as Royal Rumble entrants. They take shots at Brock Lesnar by saying that they will challenge for the WWE Championship because “the Universal Champion won’t show up.” They also reveal that the doctor ordered no more pancakes for New Day, so they are done throwing pancakes out to the crowd. The crowd is upset and chants, “We want pancakes!”

— Samoa Joe versus Jeff Hardy is up next. The winner will get into the aforementioned fatal five-way. Hardy winds up hitting a Swanton Bomb, but Joe rolls out of the ring. Joe then manages to get a sleeper hold on Hardy outside of the ring and runs back into the ring trying to get a win by count out. His plan almost works, but Hardy makes it back in at nine. However, Joe gets another choke in and Hardy eventually passes out

— Backstage segment with Vince McMahon, Shane McMahon, and AJ Styles. Styles refuses to apologize and says he will show the real side of him tonight unless Vince wants to see him do it again personally. Shane then tells Vince to be careful what he wishes for after AJ walks away.

— Rusev says the title means a lot to him and he is anxious to defend it all the time. The crowd starts chanting “Rusev Day USA,” when Nakamura winds up attacking Rusev from behind. This leads to Lana jumping on Nakamura’s back. He falls in order to get her off, and while Rusev is tending to his wife, Nakamura hits his finisher twice. He then picks up the belt, hoists it in the air, and throws it on Rusev.

— Mandy Rose faces Naomi. After the bell rings, Mandy slips out and Sonya takes the spot. Mandy is wearing a top that is made out of the “Day One” shirt that the Usos wear. Mandy then gets on the microphone and says she sent Naomi’s husband a photo earlier today. The photo is shown on the Titantron and distracts Naomi. Sonya wins directly .

— John Cena is up next. He comes out and talks about his busy 2018 including his relationship, doing movies, releasing books, wrestling, and of course, growing his hair out. He then says that the crowd is probably wondering why he is here and that “Someone is going to come to the ring and tell him to leave faster than Nikki Bella left him.” Becky Lynch interrupts! She starts roasting Cena and says that she has been aiming for him since he’s WWE’s marquee star. She says, “If you keep it up, Nikki won’t be the only woman to drop you this year.”Lynch and Cena are then interrupted by Zelina Vega and Andrade “Cien” Almas. Cena insults the pair and a mixed tag team match is up immediately next.

— Cena winds up hitting his finisher on but is thrown out of the ring by Becky Lynch. Vega manages to get a two count on a roll-up attempt, but Lynch hits an armbar for the victory.

— Miz walks into Shane McMahon’s office and thanks him for giving the team a chance. He says to be true Co-Besties, Shane should dress like him. He shows him a mock-up photo and runs off.

— Asuka is talking to Triple H backstage. He asks Asuka who deserves a title opportunity and she says that she’ll fight anyone. Charlotte then approaches and says she deserves it. Carmella also appears and says the same. Becky Lynch also enters the room and says the same. Triple H says he’ll talk to the McMahons and will get back to them soon.

— A Fatal 5-Way Match between AJ Styles, Rey Mysterio, Mustafa Ali, Randy Orton, and Samoa Joe, with the winner challenging Bryan for the WWE Championship at the Royal Rumble.

Joe slams AJ Styles through the announce table, but Styles manages to come back and pin Randy Orton. Daniel Bryan vs. AJ Styles for the WWE Championship is official for the Royal Rumble.