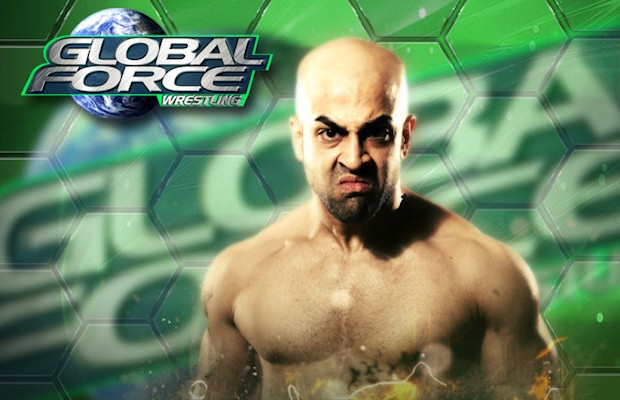 Listen to the interview: http://wildtalkradio.com/rocknsock/therack/therack071615.mp3

Former TNA and current Global Force Wrestling Superstar Sonjay Dutt joined “Multi-time Award Winning” the Rack Thursday Night. In a nearly 15 minute interview, he discussed his involvement with Global Force Wrestling and what it’s like to get in on the ground floor, how the Grand Slam events recently held are different than traditional arena style events, what it would be like to become the first ever GFW NEX*GEN Champion, his reaction to seeing Jeff and Karen Jarrett back on TNA television publicizing GFW, whom he’d like to see added to the GFW roster and who he’d like to face, his thoughts on best friend Jay Lethal winning the ROH Heavyweight Title, his favorite moment of his career so far, who he possibly sees becoming the first ever GFW Global Heavyweight Champion and and much more.

If he’s excited to take part in the launch of Global Force Wrestling and being a part of the NEX*GEN Championship Tournament: “Yeah, absolutely. I’m just really excited to be a part of something new, on the ground floor and in the first stages of this brand new company. It’s very similar to back in 2003 when I started with TNA and it was about a year old, or barely a year old and Jeff Jarrett had just started a new company and I climbed on board and here we are in 2015 and we’re doing it all over again.”

If GFW Grand Slam events are different than traditional indoors events and how so: “You know, being outside and outdoors is a completely different monster; you’ve got a lot of the elements to deal with and you’re just not sure of the weather and constraints so it’s just hard being outside. Noise travels all over the place but it’s a really cool atmosphere and a really fun time. We’re trying to be the most fan interactive group that you can possible go to a show for; we’ve got the fan meet-and-greets at 5:30, before bell time for about an hour, talent is very easily accessible; no one is hiding out and everyone is mingling with the fans. It’s just very cool to get up with the fans that I might not normally be able to at other shows.”

If he took anything from his early days with TNA to use as examples here or is he just taking it as it comes: “I think the presentation of the product is a little different, I guess very different, so you can’t really predict how things are going to go but I do know that we’ve got an awesome roster and I think the one thing that separates us for every other wrestling promotion is talent and we’ve got a loaded line-up next Friday at our first TV tapings; our Grand Slam events had loaded line-ups as well. We’re not just looking for the world-wide international stars but we’re looking for the regional stars and the diamonds in the rough, the ones the fans might not know about that need that stage to shine.”

What would it be like to be the first NEX*GEN Championship for GFW: “It would be amazing. It would be awesome; being a part of something brand new and being crowned the first ever. The first ever anything is kinda cool but especially in this environment where it’s the kind of wrestling I excel at and honed over the years and perfected, that kind of adds to it.

His reaction on seeing Jeff and Karen Jarrett appear on TNA TV to publicize GFW: “I think it was crazy and was about the same reaction everyone else had in ‘What is going on here?!’ I’m sure that’s what was going on Jeff’s mind as he was walking to the ring and as he was ring the ring speaking his mind. But, it’s a crazy business; the wrestling business is a crazy business. You cannot predict anything and you cannot rule anything out. Time will only tell what this brings not only to TNA but to GFW as well.”

Does he have a favorite moment: “Oh man, I’m always so bad at answering the ‘favorite’ questions. Well, I think as a whole, my whole career has been one big moment. I was just a little kid who loved to watch wrestling and never in a million years, even when I started going to wrestling school and training to be a wrestler the first year or two, I never aspired to make a living off of it or become a star or any of that; I just loved pro wrestling and wanted to wrestle and that’s all I ever wanted. It just kind of snowballed into this career, this big life I just kind of got sucked into and it’s just been a crazy cool ride. 15 countries and 15 years of wrestling later, this whole ride has just been amazing. I don’t know if there’s one specific moment but just the whole of my story of being a young kid and literally as far back as I can remember, I was watching wrestling on television and the next thing I’m on television working with the guys I saw on television growing up, and also some of the relationships I’ve made in wrestling, like my best friend Jay Lethal; we wouldn’t have been best friends if it hadn’t been for pro wrestling. It’s definitely a wild ride.”

Who would he like to see in GFW and who would he like to compete against: “Let’s so, oh many this is a tough on; there’s so much good talent out there. Right now, I think the connection Jeff (Jarrett) has and GFW has with New Japan Pro Wrestling in producing the Tokyo Dome pay-per-view this past January, I think North American fans were exposed to so much talent and they just didn’t know it. Being an aficionado of the Japanese wrestling scene and having spent a year to year and a half of my life out there wrestling and was up close and personal with it; some of those guys I would love to see over here. (Kazuchika) Okada, (Shinsuke) Nakamura, (Tomohiro) Ishii, (Hirooki) Goto, (Katsuyori) Shibata and we’ve gotten a taste of the Bullet Club and the Young Bucks during the Grand Slam tour. So, I think those guys coming in here creates so many fresh new match-ups. We’ve got IWGP Junior Heavyweight Champion Kushida, he’s going to be in Las Vegas next Friday and getting that type of flavor in GFW is priceless. There’s a lot of guys out in Mexico as well and they’re getting exposure out in California and in AAA. So there’s a lot of high-flyers out there that I would love to get in the ring with.

Who does he see walking out as the first ever GFW Global Heavyweight Champion: “That’s a tough one. I really like Nick Aldis, formerly known as Magnus, I’ve always enjoyed everything about his work and the way he carries himself as a professional wrestler both inside and outside of the ring; I think he’s a real special performer. He’s got a real shot, starting fresh and showing the world what he can do and showing that maybe he didn’t get that opportunity previously and this is it. Also, a guy like Brian Myers (formerly Curt Hawkins in the WWE) maybe he wasn’t given that ball that he deserved over the years and maybe this is the time for him to grab that ball and show wheat he can do.”

You can follow Sonjay through his Twitter (@sonjaydutterson) or visit his website (http://prowrestlingtees.com/sonjaydutt) for his latest news and notes. You can follow Sonjay and the other stars of Global Force Wrestling through the company Twitter account (@GFWWrestling) and website (http://globalforcewrestling.com) for the latest news and updates on the promotion including their upcoming television tapings starting this Friday, July 24th in Las Vegas, NV. at the Orleans Arena, as well as information on tickets and the latest card information.