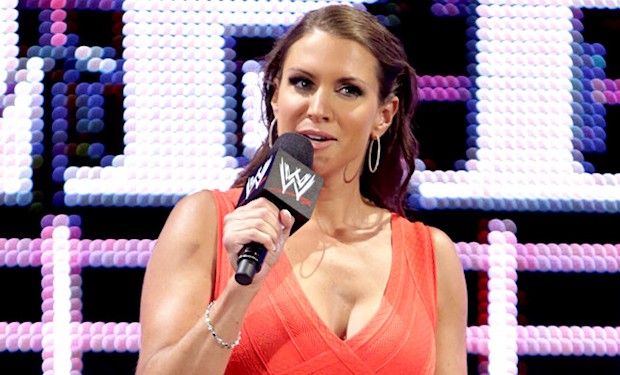 On the July 9, 2001 episode of Raw, Stephanie McMahon was fictionally revealed as having purchased Extreme Championship Wrestling (ECW) with the intention of bankrupting the World Wrestling Federation alongside her brother Shane McMahon, who had become the on-screen owner of World Championship Wrestling (in reality, the two rosters joined forces to form a “supergroup” known as The Alliance). It was also on this night where Stephanie reemerged with a pair of super-sized breast implants whether by design or otherwise, put the members of the Divas locker room to shame.

In response to speculation concerning her noticeably inflated bosom, Stephanie admitted on August 14, 2001 on The Opie and Anthony Show that she had her breasts enlarged a few weeks earlier. Stephanie said she underwent breast augmentation surgery after noticing a fan sign at a WWF live event suggesting that her breasts sagged. She added that her bra size was a D-cup.

Months later during an interview with the official WWF website, Stephanie’s mother Linda McMahon was asked about her daughter’s decision to have her breasts endowed. The company’s then-CEO stated, “My first concerns are always with health issues. Stephanie had thoroughly investigated the procedure, and she had answers to all the questions that I asked, and so I felt comfortable that if that was something that she wanted to do, then she should proceed, and she had my full support.”

In the Stamford, Connecticut-based organization, almost no subject is off-limits on television and that includes boob jokes directed toward Vince McMahon’s daughter. Stephanie’s endowment was acknowledged on the August 13, 2001 episode of Raw as Chris Jericho poked fun at the abrupt growth of her chest. On the Titantron, Y2J had an image of a much less bountiful Stephanie from earlier in the year displayed alongside a recent curvaceous shot to reveal the startling difference. Jericho then snarked, “It seems like our little billionaire princess sure has grown over the last year! Well, in two specific places at least! Talk about foreign objects—you wanna say let the bodies hit the floor? I would say let the boobies hit the floor!” Stephanie, who had concealed her chest with her arms, snapped back, “I don’t know what you’re talking about Jericho! You must have some kind of an imagination!”

Behind-the-scenes, Stephanie approved of the angle after the topic of breast enlargement was jokingly mentioned during a creative meeting, believing it could elevate Jericho’s standing in the World Wrestling Federation. Regarding this, one of her co-workers said “she’s a great sport” to Wade Keller of the Pro Wrestling Torch.

On October 17, 2002 during an appearance on The Howard Stern Show, Stephanie said she underwent the augmentation to make herself happier with her physical appearance. She felt her boobs looked like “melted packets of butter,” and did not like it.

“I had boobs when I was heavier and I lost a lost a lot of weight and they were like melted packets of butter,” Stephanie remarked. “I just didn’t like the way they looked.”

Later during the interview, McMahon said she was contemplating a second breast augmentation. She said she had recently lost weight, which made her breasts smaller.