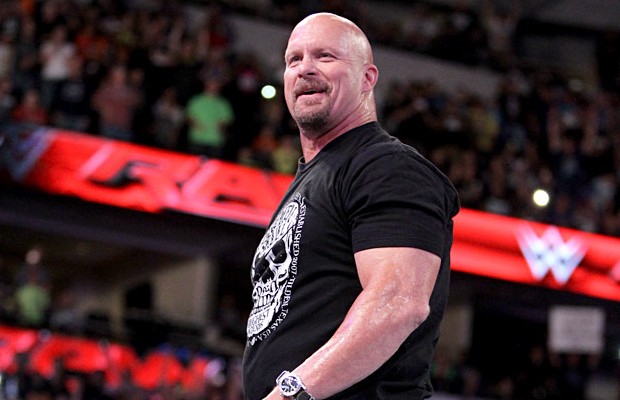 Speaking to Troy Hughes of 105.3 The Fan at the official On-Sale Party for WrestleMania 32 tickets Thursday night at AT&T Stadium, WWE Hall of Famer “Stone Cold” Steve Austin offered his thoughts on Seth Rollins sustaining a serious injury that will keep him sidelined for six to nine months.

Austin recalled being forced out of action during his hot run in WWE and said that it allowed The Rock and Triple H — who he noted were already stars on the rise — to really break out. Austin feels it’s “bad and sad” that Rollins got hurt, but it creates opportunities for talent.

“These guys in waiting that have been thinking if they had a shot, now is their chance to seize that opportunity,” Austin said. “It’s sink or swim now, and they’re going to get an opportunity that they normally wouldn’t have had coming.” – Lana appears to be healing well after suffering a wrist injury while working out in the ring before a WWE live event in September. As you can see in the above photo, she appeared at the official On-Sale Party for WrestleMania 32 tickets Thursday night at AT&T Stadium with no brace on her injured wrist.

– While promoting WWE 2K16 and WWE’s tour of India in January, Daniel Bryan talked about fans not being concerned about wrestling being scripted.

“You know how in art, there’s this term, postmodernism, and it’s basically, art for entertainment? I think we’ve become a little like that,” Bryan said in an interview with ndtv.com. “I mean, everyone starts to knowingly say, ‘it’s fake, it’s fake,’ and then the word ‘entertainment’ comes into our name, and I think that the audience doesn’t react the same way — you see something amazing, and you go, ‘yeah, that’s just a part of the script’.”

“But of course it’s also real, it’s really difficult and you can get badly injured. That’s why we’ve got to keep telling people, ‘don’t try this at home,’ because it is entertainment, but it’s also real. It’s difficult, and it’s painful.”