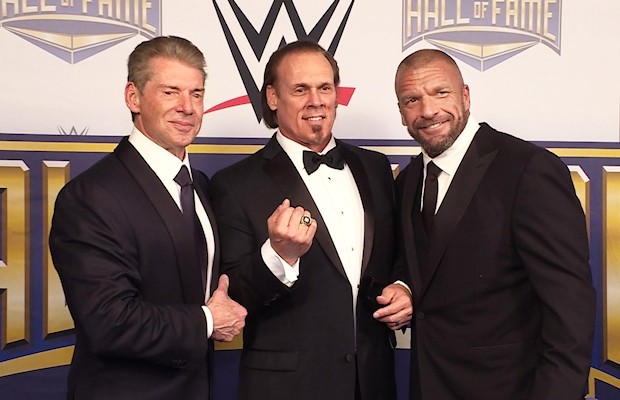 – In the video below, 2016 WWE Hall of Famer Sting talks to Tom Phillips after his induction and official retirement announcement. Sting called the induction an awesome feeling. Regarding his retirement, Sting says it’s something he battled all the way until the last minute pretty much. He says he doesn’t want to retire but it just makes sense right now. He believes he could do another match but it’s time to put his boots in the middle of the ring.

– Dana Warrior talks to Rich Brennan in this video about inducting Joan Lunden and naming her the second recipient of the Warrior Award. Dana believes her husband The Ultimate Warrior would have really embraced Lunden.

– Paul Heyman talks about tonight’s No Holds Barred Street Fight with Brock Lesnar and Dean Ambrose at WrestleMania 32 in his latest “Heyman Hustle” blog for Yahoo. Heyman says Ambrose will leave WrestleMania a bigger Superstar, thanks to Lesnar. Here’s part of what he wrote:

“I will say that Dean Ambrose will emerge from WrestleMania a far bigger superstar than he is at this moment, and he’s already one of the most popular WWE superstars in the entire world. The 100,000 fans attending WrestleMania live (and those watching on the WWE Network) will marvel at the balls it took for Dean Ambrose to face the beating he’s guaranteed to receive at the hands of Brock Lesnar. The WWE universe will applaud Dean Ambrose and shower him with respect, admiration and adulation after witnessing their hero being taken to Suplex City, all in a slow evil torturous process leading up to the F5. I can’t think of a better way for Dean Ambrose to connect with people across the globe than for him to valiantly walk into a battle he himself knows is fait accompli.”