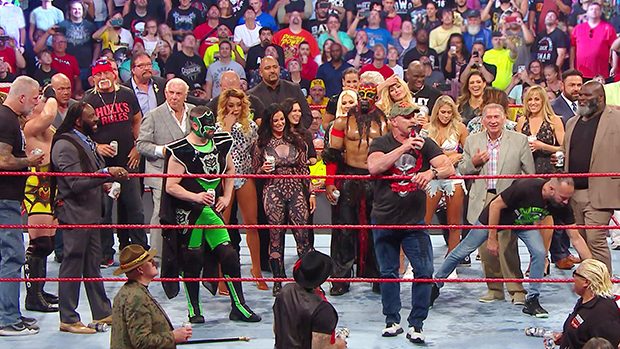 WWE Hall of Famer “Stone Cold” Steve Austin ended Raw Reunion with a heartfelt promo and beer bash involving most all of the legends who appeared on the show.

After Raw went off the air, the group continued celebrating in the ring, and WWE released exclusive video on YouTube.

Just as the video begins, Lilian Garcia appears drenched in beer. Moments earlier, Austin poured his Broken Skull IPA beer all over Garcia while she chugged two cans herself. WWE posted a clip of the wild scene on Instagram Story, which you can watch below.

In a post on Instagram, Garcia posted photos of her beer bash with Austin as well as a brief clip of them hugging afterward in the “Gorilla Position.”

This was years in the making! @wwe #RawReunion was complete with a Stone Cold Beer Bash!! 🍻😄 Thank you @steveaustinbsr for the good times and always being so amazing with me! You are a true friend!! 💛 Til the next beer bash!! 😉😎 . . #rawreunion #wwe #stonecoldsteveaustin #steveaustin #raw #beer #beerbash #party #afterraw