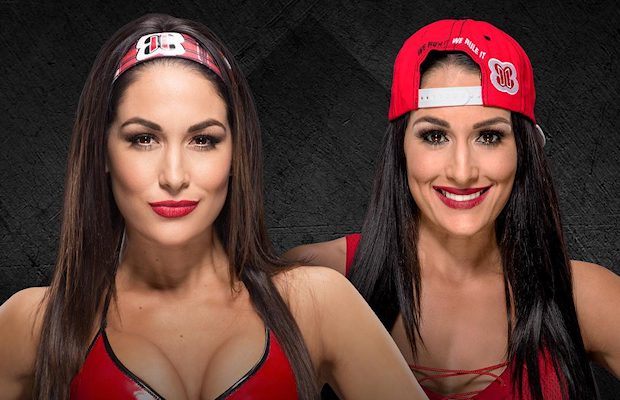 The Bella Twins’ return to action and a Raw Tag Team Championship Match is set for Raw next week at the Schottenstein Center in Columbus, Ohio.

After The Revival beat Raw Tag Team Champions The B-Team in a non-title match on Raw last night, Bo Dallas and Curtis Axel will defend their titles against Dash Wilder and Scott Dawson next week. Nikki and Brie Bella facing The Riott Squad in a tag team match has also been announced for the show.

The B-Team retained the Raw Tag Team Championship against The Revival on SummerSlam Kickoff when Dawson tried to pin Axel with a cradle and Dallas getting knocked backward reversed it. The Revival got the better of them on Raw the past two weeks, with Dawson defeating Dallas and Wilder defeating Axel last week, and The Revival winning last night’s non-title match.

The Bella Twins were in action at Sunday’s WWE Raw live event in Rochester, New York, where they teamed with Ember Moon to defeat The Riott Squad in a Six-Woman Tag Team Match. When the trio of Natalya, Ronda Rousey, and Trish Stratus made their way through the arena after Natalya beat Alicia Fox in a singles match, they came across Nikki and Brie, who revealed they would be back in action next week on Raw.

WWE announced later that The Bella Twins will face The Riott Squad in their return match.

Brie is set to team with Daniel Bryan against Maryse and The Miz in a Mixed Tag Team Match at WWE Hell in a Cell next month, and it was reported last week that WWE plans to headline WWE Evolution with Rousey defending the Raw Women’s Championship against Nikki Bella.