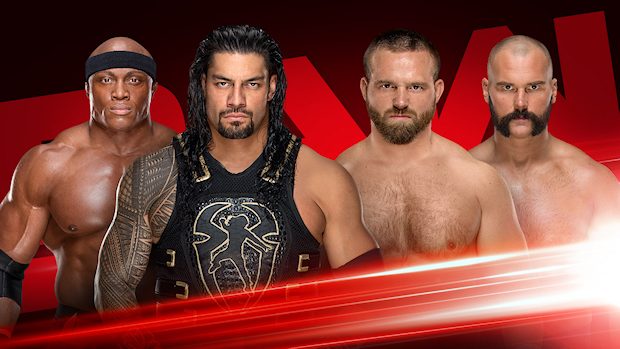 – For the third week in a row, Roman Reigns and Bobby Lashley will face The Revival on Raw.

Making it the first match confirmed for tonight’s show from the Denny Sanford PREMIER Center in Sioux Falls, South Dakota, WWE announced the rematch through a promo from Scott Dawson and Dash Wilder this afternoon.

Despite beating Reigns and Lashley last week, the storyline is that The Revival asked Raw General Manager Kurt Angle for a match against the powerhouse tandem so that they can send a message and prove their win wasn’t a fluke.

Wilder pinned Reigns with a roll-up last Monday after tension between Reigns and Lashley led to the finish.

The week before, Lashley tagged himself in and beat Wilder with a spear.

– Did you know that Alexa Bliss loves to sing country music?

While heading to a WWE live event in Fargo, North Dakota on Sunday, the Raw Women’s Champion tweeted this clip of herself singing “My Church” by country artist Maren Morris.

“When this wonderful world gets heavy
And I need to find my escape
I just keep the wheels rolling, radio scrolling
'Til my sins wash away” 🎼🎧 #ISwearCountryMusicIsTherapy #MyChurch pic.twitter.com/5KlUqXp5zh

– In this WWE Exclusive video, Natalya reflects on an emotional moment she shared with her uncle Bret Hart at WWE Payback 2016 in honor of the WWE Hall of Famer’s 61st birthday.

– One week after their blockbuster Intercontinental Championship rematch, Seth Rollins has a run-in with Dolph Ziggler before Raw.