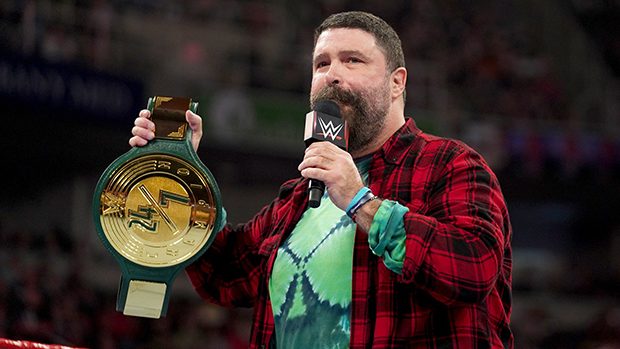 At the start of the third hour of Raw, WWE Hall of Famer Mick Foley revealed the all-new 24/7 Championship, a title that can be contested anytime, anywhere, 24 hours a day, 7 days a week, as long as a WWE referee is present. The title will be eligible to Superstars on Raw, SmackDown LIVE, 205 Live, NXT, NXT UK and even WWE Legends and Hall of Famers.

The new championship calls to mind the “24/7 Rule” of the retired Hardcore Championship, of which Foley was the initial bearer in 1998. Superstars can challenge for the title whenever or wherever they choose, meaning that any 24/7 Champion will always have a massive target on their back.

Foley then left the title on the ring mat and said who ever grabbed it first would become 24/7 Champion. A number of Raw Superstars and 205 Live General Manager Drake Maverick came down to the ring to try and grab the championship. It eventually boiled down to O’Neil and Drake Maverick. O’Neil threw Maverick over the top rope to the floor, wiping out the others to become the first 24/7 Champion.

While O’Neil celebrated on the ramp, Robert Roode snuck up from behind and rolled him up to become the second 24/7 Champion. That reign was also brief, however, as R-Truth pinned “The Glorious One” in the parking lot area shortly after.

After leading several Raw Superstars on a chase through the arena, Roode seemed to find a good hiding spot when R-Truth hid him in the trunk of his car and directed the mob elsewhere. The assist turned out to be a ruse, however, as Truth had a referee stowed away in the passenger seat who was ready to count the pinfall when he slammed Roode headfirst into the side of the vehicle and covered him right there in the parking lot.