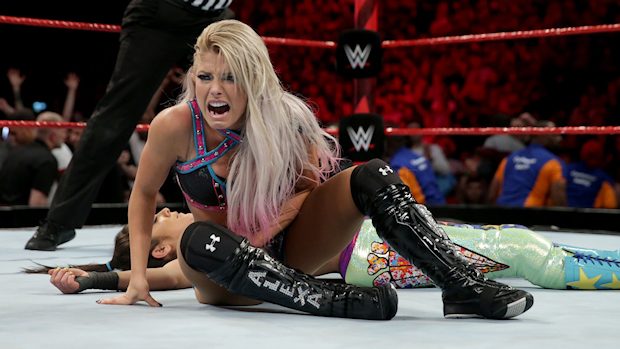 Three more WWE Superstars have earned the chance to win a Money in the Bank briefcase.

On tonight’s episode of Monday Night Raw from London, England, Bobby Roode and Kevin Owens qualified for the Men’s Money in the Bank Ladder Match. Roode beat No Way Jose and Baron Corbin to earn a spot in the match.

Owens’ road was not as straightforward, as he wasn’t even originally scheduled to compete in a second Triple Threat Money in the Bank qualifier. But when Jinder Mahal was taken out by Roman Reigns, Raw General Manager Kurt Angle had to put someone else into the match. Stephanie McMahon called Angle and instructed him to add Owens to a match also involving Bobby Lashley and Elias.

Owens hit Elias with the Frog Splash to earn the victory.

Meanwhile, Bliss earned a spot in the Women’s Money in the Bank Ladder Match, defeating Bayley and Mickie James in a Triple Threat Match when she pinned Bayley with a DDT.