A Look At Triple H and Stephanie McMahon’s Marriage 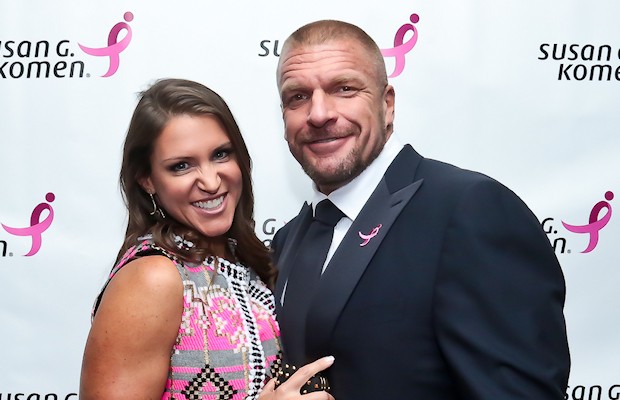 The McMahon-Helmsley Era truly began on October 25, 2003 when Paul Levesque, famously known as Triple H, married Stephanie McMahon at St. Teresa of Avila Catholic Church in Sleepy Hollow, New York. Triple H’s father was the best man, and the ceremony was described as understated, yet classy.

Professional wrestling insiders viewed the marriage of Triple H and Stephanie as a real power union. Triple H was already influential in production meetings and creative discussions. His status as Vince McMahon‘s son-in-law would make his role even more significant. Although most acquaintances believed it was a marriage based on love and commitment, the political dimensions were undeniable as Triple H was poised to remain a WWE powerbroker long after his days as an active wrestler are over.

Nearly 100 onlookers gather near the church to see all the professional wrestling celebrities. State troopers and other police officers ensured the crowd remained at a safe distance and didn’t get out of control.

The couple reside in Weston, Connecticut, near WWE’s headquarters in Stamford.

After an on-screen relationship between characters (and a kidnapping that led to a wedding) turned into a real-deal romance for Triple H and Stephanie McMahon, “The King of Kings” actually sought advice from Undertaker about revealing the relationship to the locker room.

“I had gone to Taker at one point because Taker for me was always kind of the constant in the locker room and I really respected his opinion,” Triple H said in WWE’s book on the Attitude Era. “I asked Taker, ‘Dude, can I talk to you about something personal?’ We had a really good relationship at that point. We talked about it, and this was at the point in time when nobody knew but everybody kind of knew. I said, ‘Clearly, you’ve seen this thing with me and Steph.’ He responded, ‘You would have to be an idiot not to.’ And I’m like, ‘I just need advice on this.’ Taker said, ‘Well, you got to understand what you’re playing with. It’s a little bit of fire if it doesn’t go well and it’s not an amicable split. Then where are you? Are you willing to make that gamble?’ And I said, ‘Yeah, there are perception issues: the perception of me and my career, the perception of Steph and her career and the company as a whole, and Vince [McMahon] and his perception and how it affects him and the business and all that.’

“Taker thought about it for a long time, but at the end of it he said, ‘You know what? Fuck it. Fuck all of them. It’s nobody’s business but yours and hers. You know who you are: you know what you do: you know you work with everybody. The day everybody finds out about this, you will become the piece of shit that only got to where he got because he was banging the boss’s daughter. And there will always be an asterisk next to your career and everything you do going forward and that it was all given to you for no reason. But you know who you are and how hard you work.’

“He laid all that stuff out to me and then concluded, ‘You have nothing to prove to anybody — to me, to Vince, to anybody — about your passion and all the other things for the business. Go for it.’ So that was a big thing.”