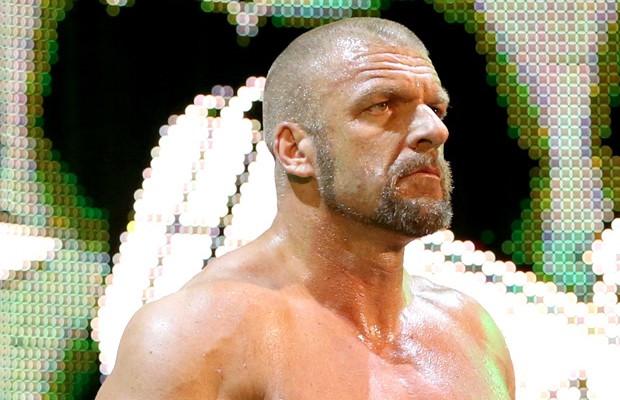 – Above and below are videos from WWE World Heavyweight Champion Triple H’s sitdown interview with Jonathan Coachman on ESPN SportsCenter tonight.

Coach points out how this will be Triple H’s 20th WrestleMania match. Triple H said it’s crazy to think about and it feels like he was just starting with the company at WrestleMania 11, not even on TV yet. He called it an unbelievable ride and said he’s been phenomenally lucky to have top talents to work with over the years. He talked about his first WrestleMania match against The Ultimate Warrior and admitted they didn’t get along but said it was the greatest thing ever for him. 18 years later they had time to reconnect before Warrior’s passing. He talked about how they both changed and said it was amazing to see it come full circle to see Warrior take his place in WWE. Regarding his favorite WrestleMania moment, Triple H said it would be against The Undertaker in Hell In a Cell with Shawn Michaels as special referee. He praised Taker and Shawn, calling the “End of an Era” moment very real to them. He had plaques made for all three of them and his sits in his office. Triple H said he will never forget that moment.

Coach said there will be more than 100,000 fans at AT&T Stadium for WrestleMania 32 on Sunday and The Game replied, “let’s hope.” Coach asked how the moment will be for Triple H and he said it will be overwhelming, like it is every year. Triple H admitted he still gets butterflies at WrestleMania and said he’s probably as nervous for this one as he was for the first. He talked about possibly breaking the attendance record and said it’s all almost overwhelming just to think about. They also discussed blowing out his quad on live TV and then returning at WrestleMania in Madison Square Garden. He said he stayed at the Embassy Suites in Birmingham, Alabama for 9 months just to focus on rehab. He said to have his return at The Garden was mind-blowing enough but that night was one of the biggest nights of his career memory-wise. Triple H said no matter how big of a star you are, you have doubts and he remembers standing next to the curtains hoping fans cared that he was back. He talked about how the crowd is what makes pro wrestling different than any other sport because without the crowd connection, you have nothing.