Becky Lynch On WWE Pushing Her Relationship With Seth Rollins On TV, Her Next Goal - PWPIX.net

Home / Wrestling News / WWE News / Becky Lynch On WWE Pushing Her Relationship With Seth Rollins On TV, Her Next Goal

Becky Lynch On WWE Pushing Her Relationship With Seth Rollins On TV, Her Next Goal 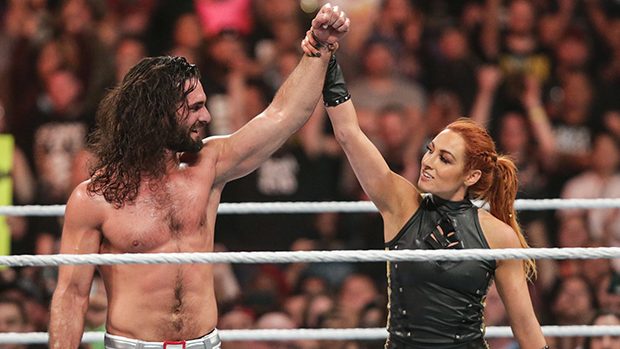 With Lacey Evans breaking the rules as the Special Guest Referee for Rollins’ title match against Baron Corbin at WWE Stomping Grounds, Lynch interfered and helped Rollins retain the Universal Championship. It was then announced on Raw that Lynch and Rollins will both put their titles on the line in a Winners Take All Mixed Tag Team Match against Evans and Corbin.

During an interview with GuideLive.com, Lynch was asked if her relationship with Rollins being brought on-screen was something that had been planned for a while, or if it came up recently.

“That’s something that came about recently,” Lynch said. “I think seeing the potential to have two top stars fighting side by side as champions is something that we couldn’t really ignore, so here we are.”

Lynch was also asked: “Have you seen either of your in-ring styles start to rub off on one another? It seems like Seth’s Twitter fingers have taken some tips from ‘The Man’ here lately…”

She responded, “No, to be honest with you, neither. None in either way. I’ve seen what he’s been doing. That’s completely him. He rightfully exposes the fact that we are the premiere wrestling show. We’re constantly putting on matches, five-star matches time after time. I think that he just wants that to be noticed and appreciated. But that’s got absolutely nothing to do with me, I don’t know that I’ve rubbed off on him in that way.

“And in-ring, no. My style is my style. His style is his style. We’re our own people, and then we can just fight side by side.”

After achieving her goal of competing in the main event of WrestleMania 35, Lynch wants to headline the event again, but in a singles match.

“To me, it’s all about maintaining, and it’s about consistency. It’s about making wrestling the coolest thing on TV, something that the people can’t wait to tune in and find out what’s happening. For me, that’s not a tougher goal, but it’s a lofty goal to really maintain that level of interest all the time. Because it’s one thing to get to the top of the mountain, but it’s a whole other to stay there. That’s the hard part. That’s when the work starts.”