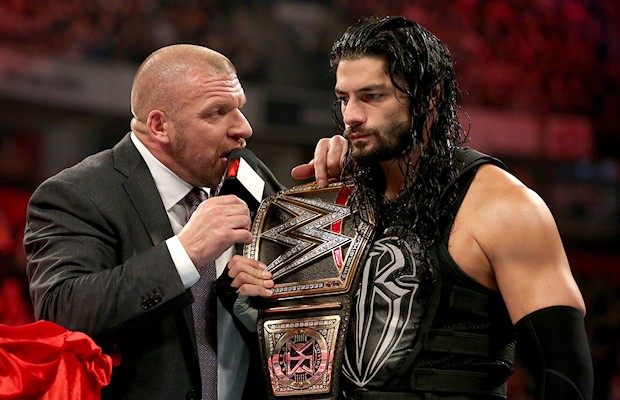 – As seen above, this week’s sitdown interview with Michael Cole features the return of Triple H. Below are highlights:

* Cole brings up the injury to Seth Rollins and the WWE World Heavyweight Title. Triple H calls it a horrible situation and says Rollins is devastated. Rollins had everything going his way, had the faith of fans and The Authority, so this is tough. Triple H says it seems unfair but he knows the kind of man Rollins is and Rollins will train harder than anyone and return to claim what’s his.

* Cole talks about Triple H’s offer to Roman Reigns on RAW and Reigns turning him down. Triple H says Reigns still has the chance to become WWE World Heavyweight Champion. Triple H gave him the opportunity to let The Authority put their faith in him, and have him return their faith. Reigns would be guaranteed to get anything he ever wanted out of life and WWE, if he changed his attitude a bit, but he chose to walk his own path alone

* Triple H doesn’t understand Reigns’ decision. He reiterates that the term “sellout” was created by people who can’t succeed and never will. He says it’s an excuse for mediocrity. Triple H doesn’t think Reigns understands what being champion will bring him. He says all the past “faces of WWE” were willing to do anything to be in that position but apparently Reigns doesn’t understand that and apparently Reigns isn’t willing to do anything. Triple H isn’t sure if Reigns can succeed with that attitude. He says Reigns hangs onto his morals and strength of character but what has that gotten him – nothing.

* Triple H says we will see where Reigns stands at Survivor Series, if he makes it that far. Cole asks who is Triple H’s pick to win the tournament. He says it could be just about anybody. He says situations like this create chaos and unstable environments. He could see Kevin Owens, Cesaro, Dolph Ziggler or Alberto Del Rio win the title or maybe a guy like Kalisto does the unthinkable. He’s much more sure about who will not win at Survivor Series, he’s almost assured of that. He guarantees that the opportunity is still there and someone will be crazy enough to take that opportunity, someone is willing to do absolutely anything to become “the man.”

Related ItemsSeth Rollins News
← Previous Story Abyss on Why He Didn’t Sign with WWE In 2006, Plans for a Feud with The Undertaker, More
Next Story → Big Name Added to Monday’s WWE RAW