How Triple H vs. Jinder Mahal Went Down Today In India - PWPIX.net

How Triple H vs. Jinder Mahal Went Down Today In India 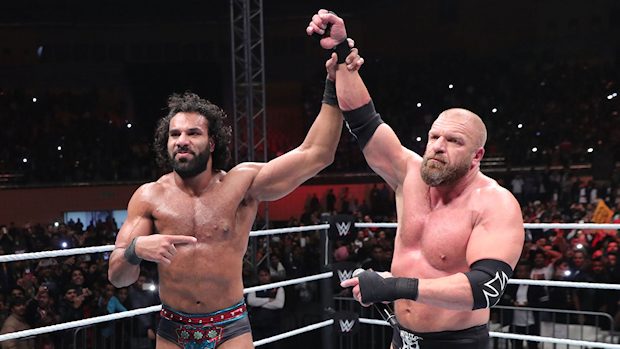 There was a lot of speculation surrounding how WWE would handle the main event of their show today in New Dehli, India when former WWE Champion Jinder Mahal took on Triple H.

The Mahal experiment, which saw the company quickly elevate the Canadian of Indian descent from a low-level role to the top position on SmackDown LIVE to coincide with marketing efforts in the second most populous country on Earth, already showed signs of being less-than-successful.

Jinder was booked to drop the WWE Championship prior to a swing through India which figured to be the centerpiece of his reign (removing him from a Survivor Series match against Brock Lesnar), then the tour was cut in half, reportedly due to poor ticket sales.

Now, in front of 1.3 billion of his people (as WWE kept telling us), The Modern Day Maharajah played The Game… and lost.

After a CLASSIC confrontation, the victorious @tripleh suggests that “India is in good hands with @jindermahal.” #WWEDelhi

According to fan reports, the crowd responded well to both men. The finish was booked with Triple H escaping a Figure 4 before Mahal kicked out a Pedigree. Jinder was then distracted by the crowd somehow before he could hit his Khallas finisher, and the referee counted three after a second Pedigree.

Thanks #WWEUniverse India for a night I will never forget. Regardless of the outcome it was one of the greatest nights of my life. Hats off to @TripleH, nothing but respect. @wweindia