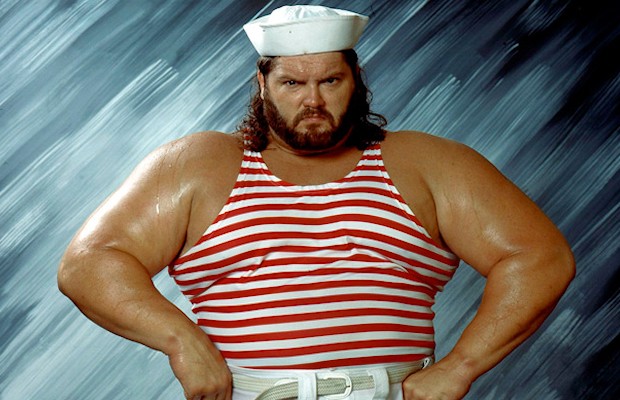 In 1990 WWE was visited by the gargantuan Tugboat Thomas. After a few dominating victories, he dropped the Thomas and went just by Tugboat. His cheery demeanor and warm ways toward friends made Tugboat seem like a big teddy bear to WWE audiences, but he was a beast to those who broke the rules and took shortcuts to win. Tugboat was a good friend of Hulk Hogan and helped out in the clashes with Earthquake and “Mouth of the South” Jimmy Hart.

In 1991, the unthinkable took place when Tugboat turned on the Bushwhackers in a six-man tag match against the Nasty Boys (Brian Knobbs and Jerry Sags) and Earthquake. His new attitude called for a new name, so Tugboat rechristened himself Typhoon and joined Earthquake to form the Natural Disasters, a team that left destruction in its wake for the two years they were partners. By the mid-1990s, Typhoon decided to leave behind professional wrestling but reappeared as Tugboat at the Gimmick Battle Royal held during WrestleMania X-7.

Fred Ottman Talks About Working With Hulk Hogan And Earthquake, Why He Left WWE, Life On The Road

He’s a man who is apart of one of the most infamous all-time comedic moments in pro wrestling and a man who put together a run as one half of the most imposing tag teams in the history of the business and although he is known by many names (Tugboat/Typhoon/Shockmaster), Fred Ottman joins The Two Man Power Trip of Wrestling.

Taking us from his start in Memphis to his tag team with Earthquake and his relationship with Hulk Hogan, Ottman has remained a fan of the business that he was a star in for so many years. Highlights are as follows:

Working With Hulk Hogan And Their Relationship: “Hulk is just awesome. For me coming into there (WWF) and them to give me a gimmick (Tugboat) and say we decided we are going to put you with the Hulk. I was nervous, putting me with him is like the Midas touch. Tagging with him and even when I turned on him, it got me over better as a heel when I turned on the Hulkster. He was always a gentleman and great to work with and it was incredible. We shared many adventures on the road. I see him occasionally now when he trains over at (Bushwacker) Luke’s gym in Clearwater. He is a super guy and it was an honor to be able to work with him and work against him.”

Turning Heel and Teaming With Earthquake (John Tenta): “They came to me out of the blue and asked me how I felt about tagging up with “Quake” and even though I thought I was doing real good enough right now, it didn’t seem like a fairly long run. When I wasn’t working I was at the curtain watching other guys work. Watching different moves and watching how they worked even as far as waiting our turn to do interviews. When you have the monitors there for me it was always a great help. So when they asked me about Quake I couldn’t imagine us together, it would be like a couple of giant animals or huge dinosaurs. But the fact that we could move and not just lumber around, we both bump good and were able to do standing dropkicks. Being with Quake it was easy on the head. I didn’t have to worry about him. I was blessed to be in there with Hulk and when they shot me in with Quake and put us with Jimmy Hart they never had to worry about us. A lot of guys on the road get into a lot of mischief.”

Road Life During That Era: “On the road we were working 300 plus days in a year at that time, but my entire career I worked like that. Most of the territories I was working in did that. Especially when I got up there (WWF) they added in personal appearances, sometimes you had double-shots working twice in one day. You would fly to Europe or Japan, come back and get right on the road and start hitting TV. When you were home, you were home for a day, maybe two, maybe three sometimes. You have to realize when you are on the road that’s what you signed up for with that kind of business.”

Winning The WWF Tag Team Championship With Earthquake And Being A Top Heel Team: “It was awesome. The first time I went to Japan and we ran the Tokyo Dome, we were booked against The Road Warriors. We were lucky having the management we had. The angles we were doing up there were really good. It was a great time to be there for me. I also couldn’t have had a better partner, it was outstanding.”

His Departure From The World Wrestling Federation: “I went down to WCW for a brief time when we wound up doing The Shockmaster deal. When I had initially left, I had put together some businesses in Key West, Florida and just before we opened my brother in law was shot and killed here in Tampa. That took me off the road. I gave my notice and about three to four weeks afterwards and then I left there. I was out from around the business. I had a lot of money tied up, I had a house in Tampa. It took me off the road for a while and I ended up a year and a half or so after all that went down to WCW.”

Fred Ottman also discusses The Shockmaster angle, working for Eric Bischoff, being a huge nerd, how he got into the wrestling business, his Memphis run as U.S. Steele and his relationship with John Tenta. The audio interview is available here.