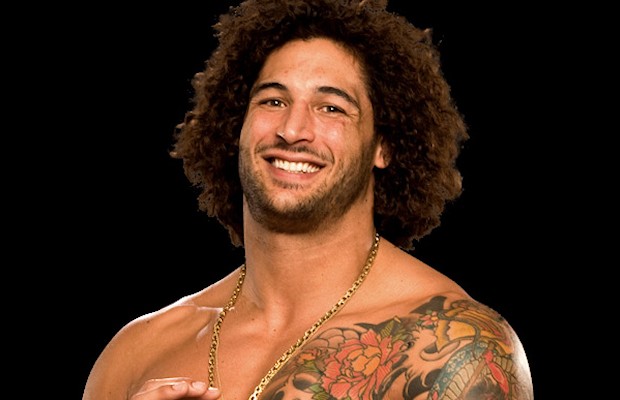 As a child growing up in Paradise Valley, the imagination of Ricky Ortiz was consumed with another man from the Arizona desert, “Superstar” Billy Graham. Which WWE Diva Is Ricky Ortiz Dating? | Ricky Ortiz Photo Gallery

A stand-out four sport athlete, Ortiz dreamed of being part of WWE. When ECW General Manager Theodore Long launched his “New Superstar Initiative” the powerful, charismatic Ortiz debuted in the Land of Extreme in July 2008.

After an impressive debut victory over Armando Estrada, Ortiz faced the likes of Carlito, Gavin Spears, and Chavo Guerrero. His career was built on discipline, self-reliance, courage and an unmatched energy and the fans were strongly behind him.

Ortiz moved to SmackDown in April 2009 and was viewed as a promising young WWE Superstar in the company. His impressive string of matches came to an abrupt end four months later when he squared off against The Great Khali in a lop-sided losing effort.

Richard Young attended the University of Tulsa as a transfer student after two years at Glendale Community College.

At Tulsa, he was a two year letter winner. He played 22 career games and was credited with 177 tackles as a linebacker.

Young attends the Kansas City Chiefs training camp for the 1998 NFL season. He would make the practice squad.

Young spends the 1999 season by playing for the Saskatchewan Roughriders of the Canadian Football League.

Young spends the 2000 and 2001 seasons in the Arena Football League with the Milwaukee Mustangs.

After the XFL folds, Richard Young attempts to make the Jacksonville Jaguars roster, but is waived during training camp.

Young would rejoin the AFL in 2002, this time with the Indiana Firebirds. Young would spend two years there.

As a member of the Indiana Firebirds, Richard Young led all Arena Football League middle linebackers with 4.0 sacks.

In 2004, Richard Young would join the Colorado Crush. He would spend three years there.

January 7, 2008: Atlas DaBone defeats Nick Nemeth in a dark match prior to the first Raw taping of the year.

January 12, 2008: Atlas DaBone becomes the number one contender to the OVW title after defeating Mike Kruel.

April 17, 2008: DaBone returns to action in Florida Championship Wrestling after suffering a torn ligament in his knee.

July 8, 2008: Atlas Ortiz changes his name to Ricky Ortiz as a result of Tony Atlas becoming an on-air character.

July 22, 2008: Ortiz informs Theodore Long about his marketing ideas and that his nickname is “The Latin Assassin.”

November 4, 2008: Ricky Ortiz defeats Jon Davis in a squash match to extend his winning streak to 6-0.

November 5, 2008: Ricky Ortiz is seen when Tony Rock pays a visit to WWE’s training facility for The Tony Rock Project.

November 25, 2008: Ricky Ortiz appears on Sci Fi’s reality TV show Cha$e as a hunter. He managed to get one capture.

December 2, 2008: Ricky Ortiz suffers his first pinfall loss at the hands of Jack Swagger in a No. 1 Contenders match.

December 16, 2008: Ricky Ortiz suffers a second straight pinfall loss at the hands of Jack Swagger in a tag team match.

January 13, 2009: Ricky Ortiz is about to make out with Tiffany when Hornswoggle interrupts the romance.

February 17, 2009: Ricky Ortiz tosses a dejected Tommy Dreamer a Ricky O Rally Towel and tells him to rally up.

July 26, 2015 – Layla revealed Friday night on Periscope that she is engaged. The WWE Diva showed off her ring and told those watching that she is getting married.

Layla’s fiancée is Rich Young, who wrestled as Ricky Ortiz for WWE in 2008 and 2009. They have been dating since last year. The couple briefly worked together on the SmackDown brand in 2009, which included an in-ring skit and Layla appearing on Ortiz’ WWE.com show.

My Love @iamrichyoung2
Thanks for being my Partner my strength & reason! I love You always #rich pic.twitter.com/eVanUIT55x

The 2015 WWE Hall of Famer and monster driver wrote Friday on Instagram, “What an amazing day!!! Did some filming today for @wwe thank you to the crew and staff at both the WWE and @monsterjamlive #Lifeisgood #AlundraBlayze #Madusa.

What an amazing day!!! Did some filming today for @wwe thank you to the crew and staff at both the WWE and @monsterjamlive #Lifeisgood #AlundraBlayze #Madusa

Great filming crew today @wwe had a blast cannot wait until it's ready! Thank you ✌️