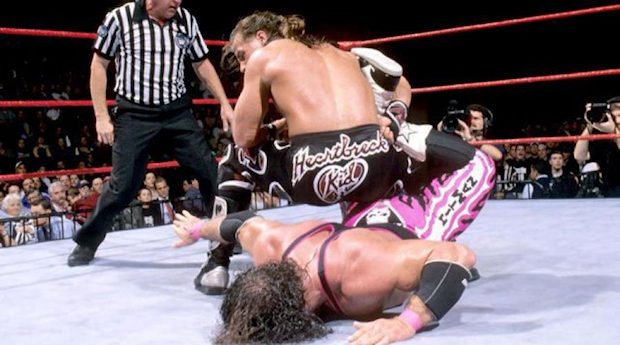 It was 20 years ago this week in which Vince McMahon and WWF employees covertly manipulated the pre-determined outcome of the match between Bret Hart and Shawn Michaels at the 1997 Survivor Series. In an interview with ESPN.com, Michaels reflected on what has become known as the Montreal Screwjob.

Did Michaels know what he was going to happen to Hart?

“[It was] probably the most uncomfortable day I’ve ever had in the wrestling business,” Michaels said of having to sit with Hart and plot out the match before the show began. “By the time the day comes, the decision has been made. But no one knows how it’s going to get done until Bret and I sit down to start discussing the match — none of this can actually go into play until we do that. And so it was just an uncomfortable day knowing what you know, [how others] assume it’s going to happen, and then you having to be the one to orchestrate it all.”

Michaels on the potential consequences:

Michaels had a brief interaction with Hart backstage, in which he claimed he had “no f—ing idea” what was coming, and then he and Triple H quickly left the building. While McMahon was ultimately the one who received a punch from Hart, Michaels was ready to face the music if Bret, Owen, Neidhart, the British Bulldog or anyone else decided he had it coming.

“You don’t go into something like that not understanding [the consequences],” Michaels said. “You may end up having to fight your way out of the building, or getting in a couple fights, or who knows. But one of the biggest things in the wrestling business is when you go out there with guys, you’re trusting one another with your bodies.

“With all the differences Bret and I had, they never made their way into the ring. And so — believe it or not — that, more than anything, was the thing. Even though you’re asked to do it, being obedient to your boss, it isn’t fun. Pain, or getting in a fight, or getting beat up, that stuff heals eventually.

“It would’ve been a lot easier, honestly, to be able to say, ‘Yeah, I knew and I did it,’ and face whatever happened,” Michaels said. “Because at least then, it’d be out in the open and whatever needed to happen would happen right there and then.”

How Michaels feels about the Montreal Screwjob today:

There are some regrets about the Montreal Screwjob that linger to this day, and while Michaels still feels he did what had to be done on that night, the moments that happened afterward are the main part of the equation he’d go back and change, given the chance.

“Quite honestly, it was the having to conceal it for all those years that was truthfully, the most uncomfortable for me, personally,” Michaels said. “And I think [that’s true] for everybody involved.

“I enjoyed darn near every day I was at work for 25 years doing that job, and that certainly was the worst day I can recall in the entire 25 years I was in the wrestling business,” Michaels said. “I probably aged more in that one day than I did in the [rest of that] 25 years. And again, you wonder, but nothing really prepares you for how big that moment is, or actually doing it.”