WWE Sets Up Triple H vs. Jinder Mahal For House Show In India 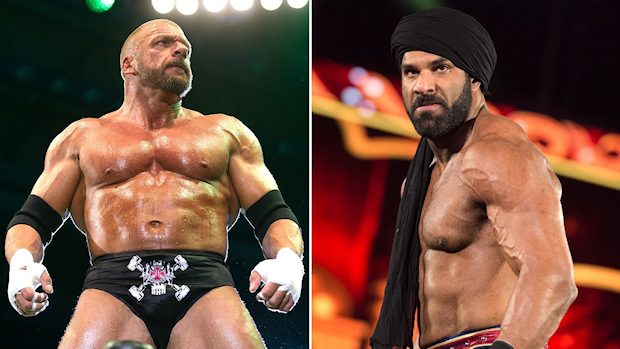 Jinder Mahal lost the WWE Championship in the United Kingdom this week, but he may have gained a new opponent when WWE Live comes to India this December.

Triple H took to Twitter Saturday night and while acknowledging the year Mahal has had, asked the WWE Universe in India if they would like to see The King of Kings go one-on-one against The Modern Day Maharaja in New Delhi on Saturday, December 9.

After finishing a WWE Live Event in Padova, Italy, Mahal replied in a video, expressing his respect for Triple H, but cautioning that if the match were to happen, The King of Kings would bow to The Modern Day Maharaja. Confident that he cannot be defeated in India, Mahal made it clear that he relishes the idea of the match and spoke to the WWE Universe to make their thoughts known

.@TripleH not only the biggest match in Indian History, but also of my career. Consider the challenge accepted by me, now @wweindia and #wweuniverse India let‘s all make this happen. pic.twitter.com/6Wv62HnWFg

WWE will be in New Delhi, India for house shows at Indira Gandhi Indoor Stadium on December 8th and 9th. Before losing the WWE Championship, Mahal was supposed to defend the title against Kevin Owens at the shows. Whether Owens will still be on the tour (and who Mahal will be facing on the 8th if he isn’t) hasn’t been announced yet.

Mahal, The Singh Brothers, and Owens had been scheduled to be the only SmackDown Superstars on what are otherwise Raw house shows. Mahal would have been positioned as a complete babyface against Owens in India. Now that he’s facing Triple H on the 9th, it seems more likely that both will end up getting cheered.

After losing the title to AJ Styles in Manchester, England last Tuesday, Mahal will inevitably get a rematch at some point. The next SmackDown-exclusive pay-per-view will be Clash of Champions on December 17th.