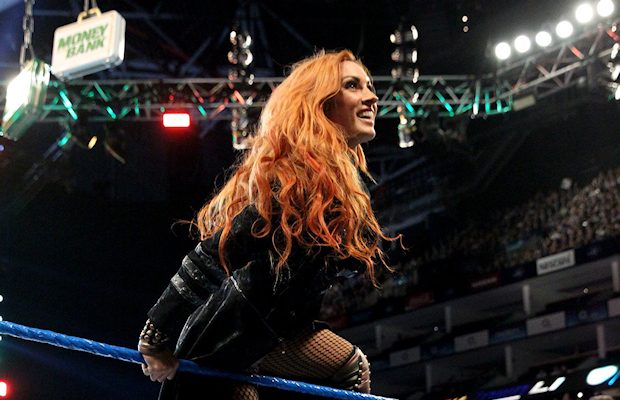 – More matches and segments have been announced for tonight’s episode of SmackDown LIVE from Citizens Business Bank Arena in Ontario, California.

WWE.com has announced that Becky Lynch will take on Peyton Royce, and Rusev will face Xavier Woods.

Both Rusev and Lynch won matches last week on SmackDown LIVE. Rusev won a Gauntlet Match to earn himself a WWE Championship Match against AJ Styles at WWE Extreme Rules, whereas Lynch forced Billie Kay to submit with the Dis-arm-her.

The Bludgeon Brothers will also appear on Miz TV, and WWE is hyping that at least two of the cast members from Netflix’s GLOW will appear. Britt Baron (who plays Justine) and Sydelle Noel (who plays Cherry Bang) tweeted videos on Monday where they said they’re going to add a glow to SmackDown LIVE and sent messages to Naomi, referencing her “Feel The Glow” catchphrase.

He is still with WWE and a member of the SmackDown LIVE roster but has been out of action for the past several months with a shoulder injury. According to PWInsider.com, Epico was in Birmingham, Alabama last week undergoing rehab to get cleared to return to the ring.

Epico underwent shoulder surgery in Birmingham in January, which he revealed in this tweet.

Surgery done!!!! Thank you to my lovely wife, mom and son for being there for me!!! And Dr Dugas for an awesome job!! Now time to rehab and get better! pic.twitter.com/80xO8QrKdv

Further details on the injury and the timetable for his return have yet to be made clear. Epico last worked a match on January 21, 2018, where he teamed with Primo Colon against The Bludgeon Brothers and The Ascension at a house show in Greenville, North Carolina. So it seems that he suffered the injury during that match.

Epico’s last television appearance took place on July 4, 2017, in an Independence Day Battle Royal on SmackDown LIVE. Primo last wrestled in the 50-Man Greatest Royal Rumble Match on April 27, 2018. He’s only worked one match on SmackDown LIVE in 2018, where he teamed with Baron Corbin, Dolph Ziggler and Mojo Rawley in a win over Breezango, Tye Dillinger and Zack Ryder on April 3.

– In this WWE.com exclusive video, Seth Rollins gets fired up after his Intercontinental Championship rematch against Dolph Ziggler on Raw ended in a disqualification because of Drew McIntyre.