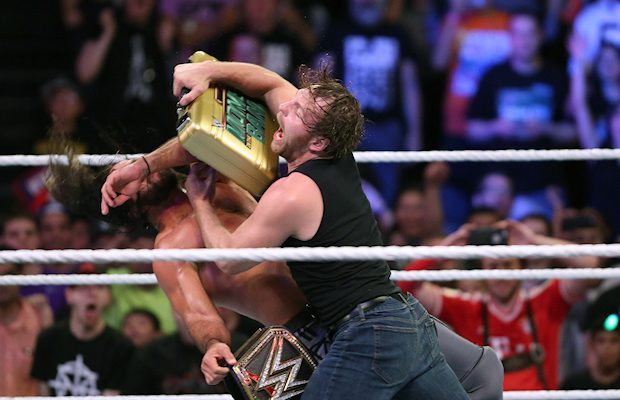 Above is this week’s sitdown interview with Michael Cole, featuring new WWE World Heavyweight Champion Dean Ambrose. Below are highlights:

* Cole says Ambrose winning the title was one of the most fun calls of his career. Cole asks how Ambrose’s life has changed now. Ambrose says he comes to every event and he’s there to lay it all on the line. He’s here to fight any time but the difference now is that everyone will be hunting him down. Ambrose says he’s more prey than predator but he will see how that changes things over the next few months

* Cole asks how it felt to cash in on the man who stabbed him in the back, Seth Rollins. Ambrose calls it a little too sweet and a little too perfect, and says what goes around comes around. Ambrose says he would’ve done the same thing to Roman Reigns and it may have been a “tad sweeter” cashing in on Reigns

* Cole asks if everything Ambrose has put his body through over the years is worth it. Ambrose says he believes the title was his before Sunday night, he feels like he’s won the title several times but something always goes wrong. Ambrose says to finally “stick it up everyone’s rear-end” and bring things full-circle felt pretty good. He says he’s never been more relaxed and in a state of complete peace than right before he cashed in because he knew it would be a success