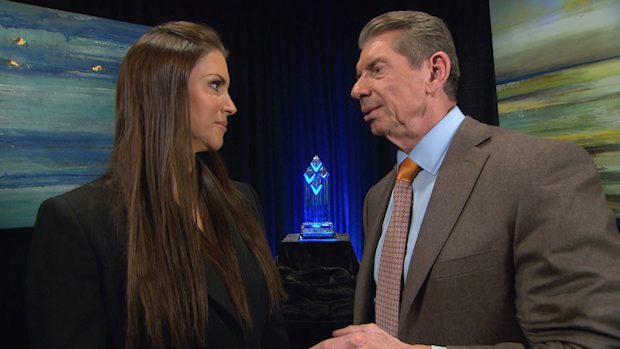 – Stephanie McMahon attended Jim Neidhart’s funeral in Zephyrhills, Florida on Friday and due to a storm in New York City, there was a good chance she wasn’t going to be able to arrive at the city in time for her scheduled meet and greet at the Barclays Center in Brooklyn, New York with Triple H. At one point, a person with a megaphone announced to fans waiting for the event that if Stephanie wouldn’t be able to make it, she would be replaced by Vince McMahon.

As it turned out, Stephanie was able to appear at the meet and greet with Triple H.

There are no fans like the @WWEUniverse! Thanks to everyone who came out tonight to meet me & @TripleH and raise money for @ConnorsCure. We had SO much fun seeing everyone and hearing your stories! #NXTTakeOver #SummerSlam pic.twitter.com/hPu77Ho0ZH

Thank you to everyone who came to meet @StephMcMahon and I this evening at @barclayscenter. A great start to #SummerSlam weekend and an awesome way to raise money for @ConnorsCure! See you tomorrow night for #NXTTakeOver! pic.twitter.com/2KVmbpY4Hp

– In the video below, WWE Champion AJ Styles gives fans a glimpse of his ring attire for his title bout against Samoa Joe tomorrow night at SummerSlam.