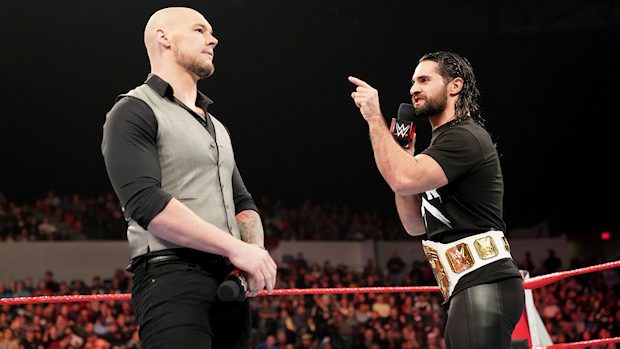 Seth Rollins got brutally honest this week about the direction of the red brand under Baron Corbin by saying “Monday Night Raw has sucked.”

Rollins kicked off Raw this week by calling Corbin to “spit some truth to power.” Refusing to hold back after Corbin entered the ring, “The Architect” cited the many ways the self-professed “General Manager-Elect” has made Raw “suck,” including wasting teams like The Revival, handing the Universal Title back to the always-absent Brock Lesnar and unjustly ending careers.  The Intercontinental Champion even brought up the show’s record-low TV ratings.

When Corbin said he didn’t care what Rollins and the WWE Universe thought of his performance and threatened to make Rollins’ life hell once he became the Permanent General Manager of Raw at WWE TLC, Rollins challenged him to a TLC Match for later in the show. With his adversary calling him a coward repeatedly, Corbin finally accepted the challenge and informed the titleholder their match would be for the Intercontinental Championship.

Rollins’ controversial promo was completely scripted, according to a report by Sean Ross Sapp of Fightful.com.

“In case you were wondering, Seth Rollins stuff on Raw was all scripted — as if there was any doubt. Almost nobody has creative freedom on the roster even in the ring, much less outside of it. Even all of the in-ring stuff has to be run through an agent on Raw and SmackDown, except in a couple of rare instances,” Sapp wrote.

“From what I’ve experienced, WWE morale is actually pretty high by-and-large and has been for quite some time. always exceptions to the rule, but usually, the guys and girls there seem happy.”

Vince McMahon is the person behind this segment as he wrote the dialogue himself. He did it to let fans know that while he hears their complaints, he’ll do Raw his way, not theirs.

The promo will likely be followed up on as WWE announced that McMahon will be on Raw this Monday to “shake things up.”