Why AJ Styles Dropped The WWE Championship To Daniel Bryan 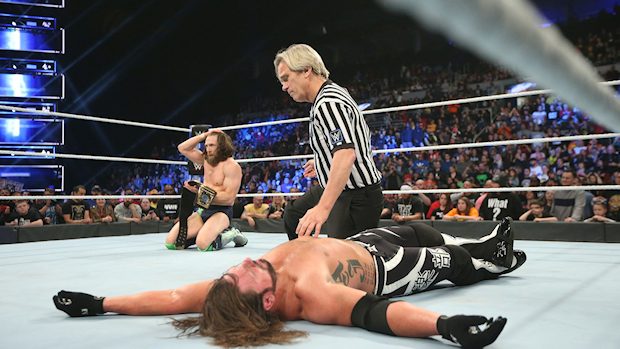 Daniel Bryan defeated AJ Styles to become the new WWE Champion. The match ended with Styles accidentally bumping into the referee when Bryan moved out of the way of the Phenomenal Forearm. Bryan then kicked Styles low while the referee wasn’t looking and hit the running knee to win the WWE Championship.

Bryan then turned heel following the match as he attacked Styles and stomped on his head.

With the title change, Bryan will now face Universal Champion Brock Lesnar in a non-title Champion vs. Champion Match this Sunday at Survivor Series.

The heel turn is something Bryan wanted for a while but it wasn’t until a few hours before the show that Vince McMahon made the decision to go through with it.

“Whatever the reason, I don’t know the reason. But it was over the weekend, Vince changed plans and wanted to go with Brock Lesnar against Daniel Bryan. This is before the Becky Lynch injury. The heel turn was decided [Tuesday] afternoon. It was basically Vince saying, ‘Let’s do it all in one day and get the biggest impact.’”

Meltzer added in the Wrestling Observer Newsletter, “But this was not scheduled for Crown Jewel, nor anywhere until the weekend. The heel turn was talked about, but not decided if or when until the afternoon of the show, where Vince made to call that if they are changing the title, they may as well do it all at once for maximum shock value.”

We heard that the discussion about Styles dropping the WWE Championship started because McMahon didn’t want Styles to lose to Lesnar at Survivor Series for the second year in a row, but he didn’t want Styles to beat Lesnar either. So the decision was made for Styles to drop the WWE Championship. McMahon wanted a similar replacement for Styles and someone who could give Brock an “easy” match. Bryan fits the bill and McMahon already planned on giving him a bigger push heading into WrestleMania 35 anyway.

WWE had plans for Bryan to face SmackDown LIVE Commissioner Shane McMahon at WrestleMania. WWE may have teased a match between the two by them get into an argument backstage before the title win, but Meltzer was told “that is no longer a WrestleMania direction.”

In a 2015 interview, Bryan said that facing Lesnar is his “number one dream match.”

“My number one dream match is Brock Lesnar,” Bryan said. “And I want that to be a WrestleMania match. I don’t know if the WWE will ever let that happen because they might be afraid he might legitimately hurt me pretty bad.”