Would Stephanie McMahon Pose For Playboy? 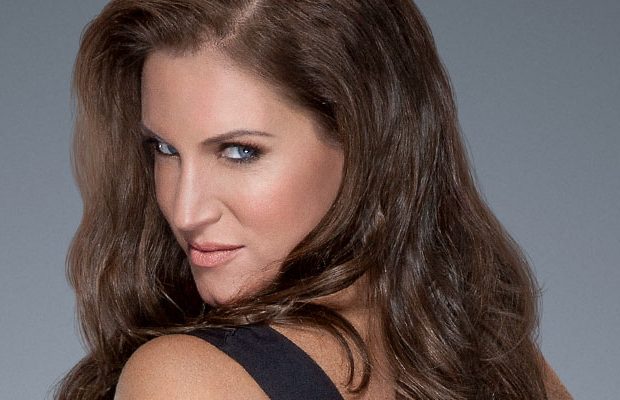 The Diva movement of the Attitude Era led Sable, Chyna, and others to willingly pose nude for Playboy. Naturally, this had wrestling fans wondering if Stephanie McMahon would follow in their path.

On November 14, 2002, she gave her thoughts on this fantasy during a chat session with fans.

“I don’t know, at this point in my life, probably not. But who knows in the future,” Stephanie said to a fan who asked if she would ever pose for Playboy.

Stephanie once teased the possibility while announcing an executive decision she had reached with Playboy as the General Manager of SmackDown!.

“The following announcement is for mature audiences only,” Stephanie said on SmackDown! on February 27, 2003. “I’m referring of course to Hugh Hefner’s proposal that a SmackDown! Diva be featured in a cover and full nude pictorial in Playboy magazine.”

“Oh, no, wait, I’m sorry. I didn’t mean congratulations to me like I was going to be in Playboy. I meant congratulations to me for closing the deal. Because ladies and gentleman, the hottest, sexiest, finest Diva that will be featured in next month’s Playboy magazine will be … Torrie Wilson!”

Following her announcement, Wilson’s notoriety grew as she received a huge push. She also began feuding with the returning Sable, who appeared nude in the April 1999 issue of Playboy. That issue was the best-selling Playboy in over five years. The November 2000 issue, featuring Chyna, sold more copies. Both Sable and Chyna did follow-up spreads under their real names and sales were brisk, but not as high as before.

“Anytime we can expand our reach outside of our audience in a place our audience is not normally found is a good thing for the WWE brand,” Stephanie said in WWE 50. “It brings new eyeballs onto our programming; it gets people interested. Sable and Chyna doing Playboy was one of those times because suddenly we were mainstream. We were competing in a space that we had never been in before.”

While Stephanie never posed nude herself, she fell victim to repeated wardrobe malfunctions at WWE events. In the weeks leading up to WrestleMania X8 in early 2002, almost all of her got accidentally exposed.

Determined to put her marriage with Triple H back on the right track, Stephanie said she was pregnant and convinced him to renew their wedding vows. However, minutes before the ceremony was due to take place (in the middle of the ring on Raw on February 11, 2002), Hunter got a phone call from Linda McMahon telling him that Stephanie lied about expecting a child.

Triple H waited until just the perfect moment in the ceremony to go off on Stephanie.

Stephanie looked in disbelief as Triple H became hostile. “The Game” yelled at her, asking how she could do this to him. He asked why she lied, accusing her of getting an actor to portray a doctor, and then showing him a phony photo of their unborn baby.

Vince McMahon, who walked his daughter down the aisle to a chorus of boos, got in Triple H’s face and pushed him. In response, Hunter shoved Vince to the canvas. He then demolished the altar and gave his father-in-law the Pedigree.

Stephanie’s tears turned to anger as she began yelling at Triple H. He then shoved Stephanie down to the canvas, causing her to experience a nip slip.

Stephanie’s right nipple was slightly visible during this humiliating wardrobe malfunction on live television. She was wearing a low-cut wedding dress without a bra on, which led to her nipple being exposed.

Following the wedding ceremony, Stephanie and Triple H became worst enemies. In response to being ditched, Stephanie sided with Chris Jericho — who Triple H challenged for the Undisputed Championship at WrestleMania X8.

Stephanie had an even more embarrassing nip slip at a SmackDown! taping on March 12, 2002. After she kicked Triple H in his injured leg as he was brawling with Jericho, “The Game” threw her on the announce table. Hunter was about to give her the Pedigree on top of the table when “Y2J” nailed him in the leg with the title.

When Stephanie bent over to take the move, her breasts fell out of her low-cut leather top. Since Stephanie wasn’t wearing a bra underneath, she suffered a nip slip.

With SmackDown! taped in advance, Stephanie’s wardrobe malfunction got edited out of the television broadcast. However, uncensored satellite footage of her nip slip managed to surface online, as well as a nude candid photo that a fan snapped from ringside.

While appearing on The Howard Stern Show on October 17, 2002, Stephanie discussed her pair of nip slips.

“It was really an accident. I was horrified,” Stephanie said to Howard Stern in response to him asking if she had planned it. “If I had planned to do something like that, that’s one thing, but when it sorta happens and you’re not planning on it, it’s a little unnerving.”

As if that wasn’t enough, Stephanie’s ass also became exposed the night before she had her second nip slip. And once again, the reason for her wardrobe malfunction came at the hands of Triple H.

On Raw on March 11, 2002, Triple H furiously ran after Stephanie, chasing her up the ramp and grabbing her by the hair. He then threw his soon-to-be ex-wife into the ring. As she tried to crawl out of the ring, Hunter gripped the back of her pants and inadvertently, her thong as well. Then when he pulled Stephanie back into the ring, her bare butt became exposed on television.