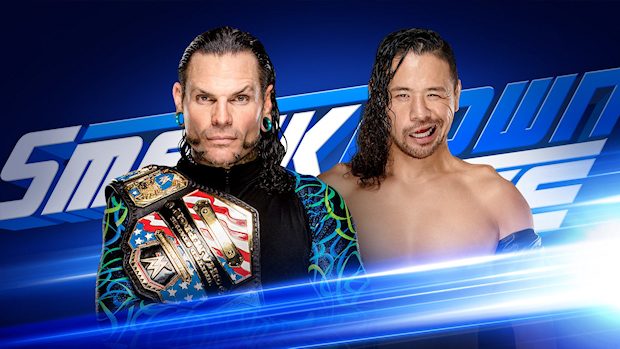 WWE has announced that Shinsuke Nakamura is currently injured and unable to compete.

No word yet on when the injury occurred or what kind of injury it is but Nakamura last wrestled at Sunday’s WWE live event in Fresno, California. That match saw WWE United States Champion Jeff Hardy retain over Nakamura, Samoa Joe and Shelton Benjamin in a Fatal 4 Way. Nakamura did not wrestle at Monday’s live event in Bakersfield, CA and was replaced by Rusev in the Fatal 4 Way.

Nakamura was set to challenge Hardy for the title in the main event of tonight’s SmackDown but that match has been nixed. Hardy will now defend against whoever answers his Open Challenge.

Below is WWE’s announcement on the match change and a video from Dasha Fuentes. Dasha notes that Nakamura suffered the injury on Monday night.

Shinsuke Nakamura has suffered an injury and is unable to compete against Jeff Hardy for the United States Championship tonight on SmackDown LIVE. However, The Charismatic Enigma is not taking the night off, and has issued an open challenge for his title. Who will step up and answer the call to action? Find out tonight on SmackDown LIVE at 8/7 C on USA!

EXCLUSIVE: Unfortunately, @ShinsukeN sustained an injury last night and is not medically cleared to compete. However, #USChampion @JEFFHARDYBRAND will issue a #USOpenChallenge TONIGHT on #SDLive! pic.twitter.com/1wefUTFRRM