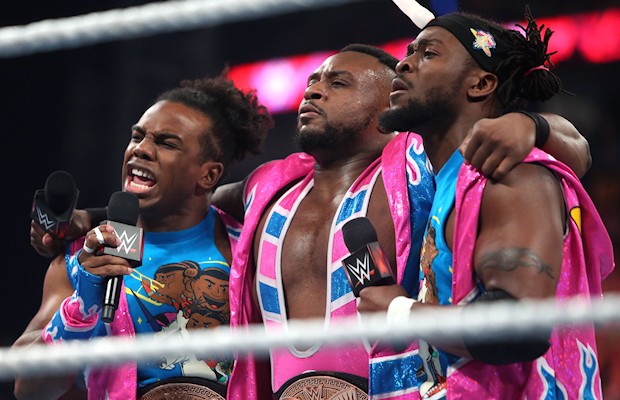 – The following video features former – and once again current – WWE Superstar Jinder Mahal, who made his return to RAW last night in a one-on-one encounter with Heath Slater. Jinder says it’s hard to think about a “2MB Reunion Tour” when he’s focused on “rocking RAW.”

– WWE posted the following in regards to the injuries sustained by Big E at the hands of Luke Gallows and Karl Anderson:

After Gallows & Anderson pulled Big E groin-first into the turnbuckle at the end of a post-match brawl between Gallows, Anderson and the entirety of The New Day, the WWE Tag Team Champion was taken to the trainer’s room. He underwent several tests and medical examinations, but WWE officials did not confirm the specifics or severity of Big E’s injury at this time.

Stay with WWE.com for more information as Big E’s condition is revealed.

What happens when u mix AJ styles and Georgia together…. you get a phenomenal shirt. Only available at Atlanta Raw pic.twitter.com/rJuWJ3Qgr4