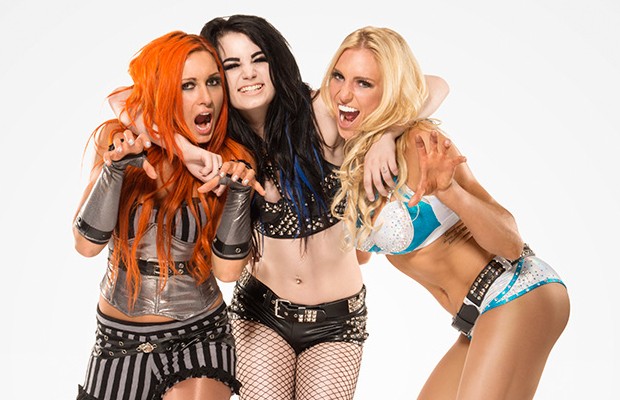 It would appear that some pornographic images have forced WWE to change the group name of Paige, Charlotte and Becky Lynch.

Which apparently WWE decision makers didn’t do before rolling out the name on television and social media on August 3.

TMZ picked up on it, noting that BangBros plan to send Vince McMahon a thank you gift basket. As a result of this, WWE is scrubbing “The Submission Sorority” off its official website.

Shortly after TMZ published its story, WWE.com issued this poll asking fans which Divas faction would Ronda Rousey fit in with best, with the group of Paige, Charlotte and Lynch specifically mentioned as “The Submission Sorority.” The name of the group has since been changed to “PaigeCharlotteBecky.”

Furthermore, the trio is referred as “PCB” in this WWE.com video of Charlotte and Lynch reacting to their team wins against The Bellas Twins and Team B.A.D. on Raw.

WWE.com also released this photo gallery today of the Diva Revolution’s three squads and the trio of Paige, Charlotte and Lynch were referred as “The Submission Sorority” in the original caption. The caption has since been changed, with no reference to the exact name.

It was reported Wednesday night that WWE may change the name. Though they’ve thought about using a “Horsewomen” theme to tie into Charlotte’s father Ric Flair’s legacy—and even more officially single her out as the face of their #DivasRevolution—there are concerns about upsetting Rousey, a potential WrestleMania 32 player. The UFC star and 2015 ESPY Award winner’s training group calls themselves “The Four Horsewoman,” also as a nod to Flair’s famous stable of yesteryear.

The other name being discussed it “The Submission Sisters,” which seems like it might present similar internet search problems.