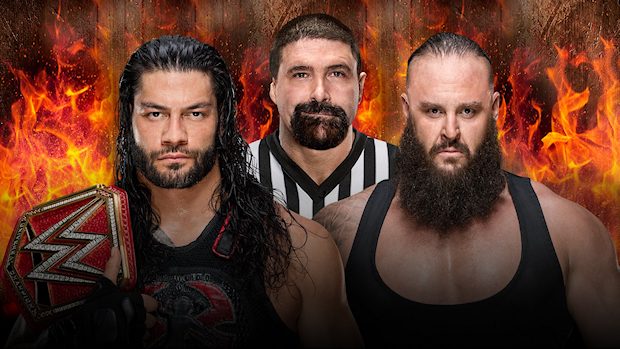 WWE Hell in a Cell takes over at San Antonio’s AT&T Center for the first time tonight as Roman Reigns puts his Universal Championship on the line against Braun Strowman, with WWE Hall of Famer Mick Foley as Special Guest Referee.

Thanks to Bet Wrestling, here are the latest betting odds for WWE Hell in a Cell:

We are looking at a situation where most of the defending champions are favored to retain successfully, and none more favored than Raw Women’s Champion Ronda Rousey with astronomical odds by today’s standards of -1050. To put this in perspective, the next most favored are The New Day at -400, who are defending the Smackdown Tag Team Championships against Rusev Day on the pre-show.

Smackdown Women’s CharlotteFlair is actually now a +130 underdog against Becky Lynch. That changed very recently, as Charlotte was the favorite to win the match earlier today.

Roman Reigns is favored at -425 in his first PPV title defense as Universal Championship against longtime nemesis Braun Strowman in a Hell in a Cell. WWE Champion AJ Styles has slight odds of -155 to topple Samoa Joe once again. The Smackdown Brand’s Hell in a Cell offering sees Randy Orton favored at -365 in his Cell match against Jeff Hardy.

Two married couples will compete in a mixed-tag match seeing the tandem of Daniel Bryan & Brie Bella favored at -300 against The Miz & Maryse.

One match is not offering “end of broadcast” odds as of press time so for now it’s initial odds only. We do not know if this is simply a sports book oversight or if there is some other explanation. This match is the Raw Tag Team Championship bout, where Dolph Ziggler & Drew McIntyre are slightly favored at -145 against Dean Ambrose & Seth Rollins. If this match does end up having a “Dusty Finish” of any kind, we should probably take that as an indication that some type of leak or inside betting has happened.