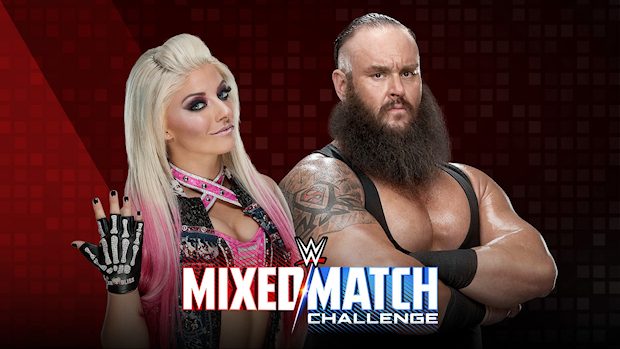 Week 3 of WWE’s Mixed Match Challenge saw Braun Strowman and RAW Women’s Champion Alexa Bliss defeat Sami Zayn and Becky Lynch. Braun and Bliss move one step closer to winning $100,000 for Connor’s Cure and will now go on to Week 8 for a match with the winner of Week 4, which will feature Goldust and Mandy Rose vs. Naomi and SmackDown Tag Team Champion Jimmy Uso.

Rose was revealed as Goldust’s new partner on tonight’s show. As noted, Alicia Fox was originally scheduled to team with Goldust but she is currently recovering from a broken tailbone.

This week’s show had around 200,000 total views at the end of the episode, down from the first 2 weeks.

Below are photos and videos from tonight’s show on Facebook Watch, which will be available on the WWE Network this Thursday:

NEXT WEEK on @WWE Mixed Match Challenge, @Goldust teams with his NEW partner @WWE_MandyRose to take on the husband-and-wife duo of #JimmyUso and @NaomiWWE! #WWEMMC pic.twitter.com/WmdeNhxtqN

@beckylynchwwe and @samizayn have one last “team meeting” to strategize before their #WWEMMC match!