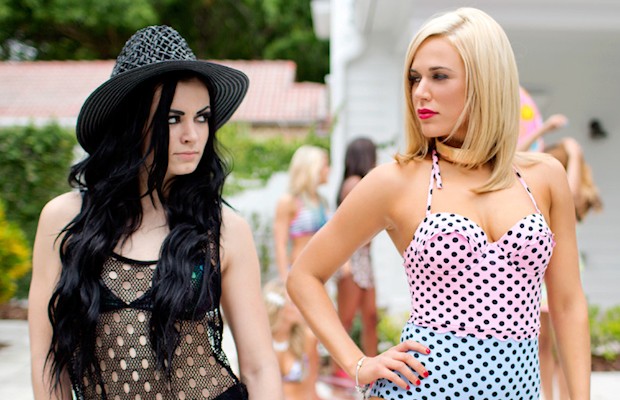 – WWE has a new poll asking fans which WWE World Heavyweight Title tournament competitor has the toughest test at Survivor Series on Sunday – Roman Reigns, Dean Ambrose, United States Champion Alberto Del Rio or Intercontinental Champion Kevin Owens. With over 12,500 votes, Reigns is currently leading with 49% while Ambrose has 27% and Del Rio has 13%.

– A new $24.99 t-shirt for The Gobbledy Gooker has been released by WWE at this link.

– WWE issued a Fan Council survey to fans in Australia on Monday to gauge their interest in a “major televised stadium event” in Melbourne, the site of UFC 193 this past weekend. It sounds like they could air a future WWE Network special from Down Under.

– WWE has picked up on the Lana vs. Paige Twitter drama that we covered earlier. They wrote the following:

Charlotte isn’t the only Diva who took Paige’s brazen comments personally during the contract signing for the Divas Title Match at Survivor Series.

Lana, who is currently out with a wrist injury, called Paige out over Twitter Tuesday morning for disrespecting the memory of the Divas Champion’s brother Reid, who passed away in 2013. The tweet that started it all has since been deleted, but it was severe enough to begin a war of words between Lana and the No. 1 contender to the Divas Championship all the same.

The exchange veered into highly personal territory as the two continued to snipe back and forth throughout the morning until The Ravishing Russian had exhausted all her insults and abruptly ended the beef. If nothing else, Lana’s got a ready-made foe for her in-ring debut.