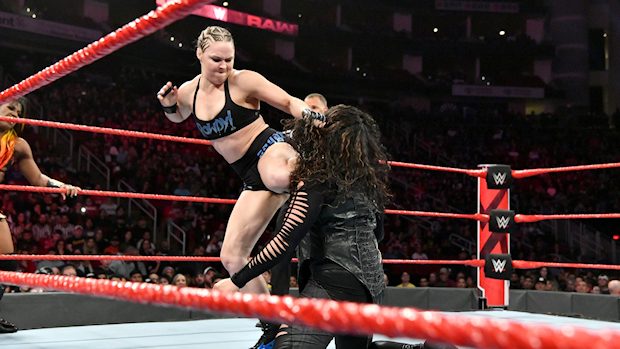 — In what would be a rematch from Survivor Series, WWE plans on having Ronda Rousey face Charlotte Flair at the Royal Rumble on January 28.

“I’m pretty sure they’re gonna go with Ronda and Charlotte at Royal Rumble. Based on everything I heard, that was the direction,” Dave Meltzer said last night on Wrestling Observer Radio.

Meltzer did not say how this match would get set up and whether a title would be on the line. There’s no word yet on whether this means Rousey or Flair is changing brands.

If this match goes down at the Royal Rumble, it almost certainly won’t be happening at WrestleMania, as has been rumored. Meltzer previously said that WWE discussing holding Rousey vs. Flair at WrestleMania.

— In the latest edition of WWE Canvas 2 Canvas, artist Rob Schamberger presents the latest in his playing card-styled paintings of WWE Superstars in “The Kingslayer,” Seth Rollins.