Eva Marie portrays a heel in NXT, but she’ll apparently be a face on Sunday. WWE announced after Raw that she will be competing in a 10-Diva Tag Team Match this Sunday on the WrestleMania Kickoff.

WWE provided this clip of Eva Marie returning to Raw in a move the Brooklyn, New York crowd didn’t seem to care for.

Eva Marie emerged after Emma defeated Paige with the help of Lana in a singles match. A brawl ensued on the outside between the nine participants in Sunday’s tag team match before the redheaded Diva returned to the ring and charged after Lana.

After the ring was clear, with Eva Marie and Paige, Natalya, Bella and Fox standing tall, the four faces seemed both shocked and annoyed that Marie decided to join their team.

While Eva Marie has been incessantly booed during her time at NXT, WWE officials believe the general WWE audience thinks differently than the NXT audience. Dave Meltzer noted on the latest edition of Wrestling Observer Radio that WWE expected Marie to receive a positive reaction from the crowd.

“How do you not figure this one out?,” Meltzer wondered. “That was an easy one.”

Eva Marie said in an interview earlier this year that the negative reaction from the crowd used to upset her, but now she embraces it. 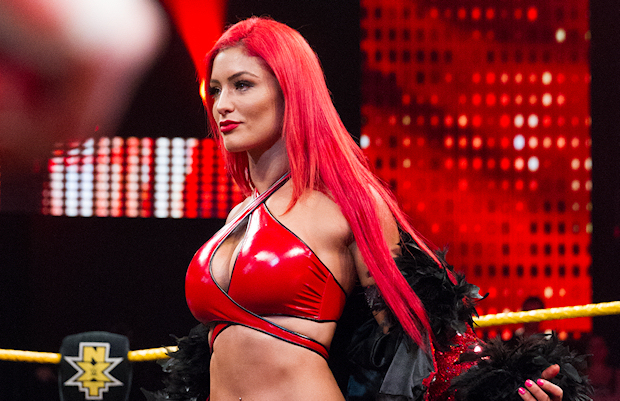 “Walking into the WWE I was brand new; I did not know how things worked,” said Eva Marie. “Deep down I wanted everyone to cheer and adore me but this is the WWE where it doesn’t work that way all the time. There’s a good guy and a bad guy, and I am pretty badass bad guy.

“Now that I have the training behind me, I think that really shows I do have the skills and talent to become a well-rounded wrestler. I think it goes back to me asking Vince [McMahon] and Triple H on wanting to go back to NXT to hone my craft and learn the ropes. I feel extremely confident when I walk out there now and I embrace the boos and the craziness from the WWE and NXT Universe.

“At one of the live events somebody had a sign that said ‘If Eva Marie Is Here We Riot.’ I thought that was pretty cool. The crowd reaction is something that I definitely love. When I first started if I walked out from behind that curtain and heard a pin drop or deafening silence, then you have to look at switching something up. Now, I am embracing my heel character to the fullest.”